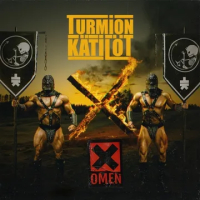 
The Midwives Of Doom continue on their victory streak started two albums ago, and Omen X stands out as a manifest of everything this band is about: industrial riffs, heavy beats, 90s Eurodance, and anthemic, harsh vocals. It is equally headbangable and danceable, and a sheer blast to listen to. Turmion Kätilöt’s previous album Global Warning (their first release on Nuclear Blast) was one of the few albums I guest reviewed before being invited to the Metal Storm contributor team, and the fact that I chose to write about this particular band back then should tell you everything you need to know about how big a fan I am. After a stint of less-than-great albums, they introduced new secondary vocalist Shag-U into the band for 2018’s Universal Satan, which properly revitalised their sound, and they show no signs of slowing down anytime soon.

A thudding disco beat and wavering trance arpeggio opens up the album, before we hear the words “motherfuckers, drop the bass”, and “Totuus” (The Truth) starts blasting away. It builds, like most songs on Omen X, on a straight disco-like beat provided by drummer DQ, who sounds somewhere between electronic and metal; especially the kick has an unmistakable disco thud to it. It is the perfect opener for the album, with singers MC Raaka Pee and Shag-U duelling each other’s fast-paced, grunted/screamed vocals in the verses and then coming together in the rhythmic chorus. Having two vocalists who both employ harsh vocals might seem like a strange idea in theory, but their different styles are very easy to tell apart and it just provides a much more upbeat, energising feel to the vocal delivery.

A catchy Eurodance synth hook courtesy by RunQ (Janne Tolsa from Tarot and Eternal Tears Of Sorrow - in case you're wondering, his alias alludes to the Finnish word for "wanker") then introduces “Gabriel”, which properly showcases how damn catchy Turmion Kätilöt can be. While the previous album started with one of the catchiest songs, here they wait with it for a while, to very good effect. In fact, the third song, “Vie Se Pois” (Take It Away) somehow manages to be even catchier, with a groovy riff and some clean vocals in the chorus, and this pattern even continues afterwards; this is a masterfully designed tracklist that piecewise introduces all of the band’s elements in spectacular fashion, and it all comes together perfectly on the depraved joyride that is the anthemic chorus of the fourth track:


One of the gripes I had about Global Warning was that the slower tracks after a while started seeing themselves skipped over as I replayed the album, and there are fewer of them on Omen X, and the ones that exist are more dynamic and spread out across the tracklist in a smarter way. “Verestä Sokea” (Blinded By Blood), for instance, contains a verse that is basically just drums and vocals (supported by a subtle synth pad) but then explodes into one of the most memorable choruses on the album, complete with “Hey! Hey!” gang shouts reinforcing the lyrics about beating your face against the wall until you cannot see through all the blood. Yes, Turmion Kätilöt is the sort of band that puts a smile to your face, then makes you seriously question what you're smiling at (this, of course, is a compliment).

Omen X continues in this fashion, and there are no bad songs on the album. They all have a recognisable identity, with their own memorable beats, hooks, and other quirks that keep them from blending together too much. Sure, after over half an hour of what I in 2020 dubbed “extreme disco metal”, you might find your headbanging get weaker, but the foot-tapping will doubtlessly remain all the way to the fantastic closer “Kuolettavia Vammoja” (Fatal Wounds). It is the calmest song on the album, but the house/EDM piano hook it builds on will echo in your head until you play the album all over again. Omen X is a slight improvement on an already great formula, a manifest from a band that now has 10 albums behind them, but most of all, it’s simply one hell of a fun ride.