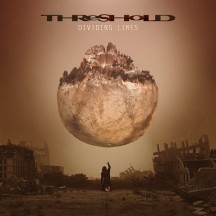 
In God's Grand Book of Progressive, a whole chapter would be dedicated to Threshold. He seems to be a fan of closing doors to be opening windows so I imagine that Threshold would be high on His list anyways. The band has a rich history. It is becoming hard to fathom that Wounded Land is from 1993. That will make it 30 years old this year. With that in mind, their career is best viewed like someone's life, which is, in chapters. Thankfully for us, those chapters can easily be tracked through their lead singers. The multiple departures and returns of Damian Wilson, the ten-year tenure of Andrew "Mac" McDermott, and Glynn Morgan now on his second spell with the boys. In any case, Legends Of The Shires was a monumental album with Glynn's vocals signaling yet another rebirth of Threshold. Quid of Dividing Lines, say ye?

First and foremost, I find the album a little more accessible than its predecessor. Don’t get me wrong, this is still progressive metal but somehow that extra shade of complexity from the previous offering has been scaled back a tad. The result is a collection of cleaner tracks that feel like individual tunes while still being part of something bigger. Second, the atmosphere on Dividing Lines is a bit somber as far as Threshold goes but it works to its advantage by bringing something new to the table.

The incisive guitar riffs of Karl Groom, the mastery of Richard West on keys, the solid rhythm tones of Steve Anderson, and the ever-impressive groove of Johanne James's drumming are all key to that trademark Threshold sound by now. The familiarity of Glynn's velvety smoothness, and his innate ability to generate vocal power seemingly out of nowhere are a huge asset to this band.

And now for a quick run-through that won't do it justice but might satisfy your curiosity. While "Haunted" and "Hall Of Echoes" play to perfection to that mid-tempo prog craving of mine, a track like "Let It Burn", with that added speed and aggression does spice things up and immediately stands out. It also features some truly amazing guitar work. "Lost Along The Way" does the job as far as prog ballads go. "Run" adds some oomph and has some shades of another great UK act, TesseracT, minus the djent. And while the closer "Defense Condition" evokes the best tunes from March Of Progress, the best prog moments are mostly centered right smack in the middle of the record from "Silenced" to "King Of Nothing". The other standout that is "The Domino Effect" is in essence the perfect continuation of Legends Of The Shires, with that beautifully tantalizing guitar solo that is like a perfect reverberation from "The Man Who Saw Through Time". At the end of the day, "Complex" might be the catchier song here despite having a massive sound and the most proggy bits.

As is often the case with Threshold, consistency is the key, and Dividing Lines does not disappoint in that regard. It is hard to compare it to its epic predecessor, for the format is somewhat different. Nevertheless, Dividing Lines is an extremely solid album by veteran musicians who still have that flame burning but also draw on experience. So there you go. 30+ years of awesome music and yet the band are still under-appreciated while being genre-defining. Perhaps Threshold are destined to be the Uriah Heep of progressive metal. If that means they will still be releasing albums for another 20 years, sign me up though.

Written on 16.01.2023 by
Dream Taster
Bringing you reviews of quality music and interesting questions such as: