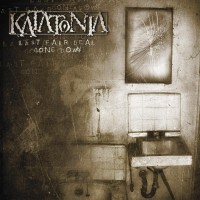 
Over the course of a decade, Katatonia have grown from their blackened doom origins to one of the best bands in music today. With each of their previous four offerings, they have explored themes of emotional isolation and melancholy through various musical expressions, and in so doing have become innovators and an inspiration for others. With Last Fair Deal Gone Down, the band's fifth release, Katatonia have achieved their most complete and convincing work to date, creating an album that almost makes their past efforts seem merely pedestrian by comparison.

For the first time in the band's history, they have a full, permanent line up, as they welcome into their ranks bassist (and brother of guitarist Fredrik) Mattias Norrman and drummer Daniel Liljekvist, both of whom are greatly responsible for the sense of urgency and power in the sound. Daniel is especially impressive, as he is a very talented and skilled drummer. His work on this album adds a new dimension to the band's sound, injecting a vibrant and powerful backbone while also adding a slight complexity to some of the rhythms found within these songs. The addition of both Mattias and Daniel take Katatonia's sound to a higher level of confident songwriting and powerful arrangements. It is this new level of confidence that makes some of these songs the best the band have ever written. Together, guitarists Anders Nystrom and Fredrik Norrman have developed a unique chemistry that leads one to believe they were born to play in this band. Although still influenced by the classic early Paradise Lost guitar sound, Anders has fully embraced the concept of subtlety. It's with his subtle touches in the mellow, atmospheric sections of "The Future Of Speech", Dispossession" and "Sweet Nurse" that he manages to recreate the act of expressing melancholy through guitar playing. Both he and Fredrik have always been well learned in using the guitar as to create ambiance, but here there is increased emphasis on this concept. But where the attention lies mostly is with the vocals of Jonas Renkse. His third album in using his clean vocal delivery exclusively, he gives his best performance on this album. Where on past efforts he sometimes seemed a bit hesitant to "go for it" with his voice, he now is confident to experiment and explore new realms of expression. His singing has always been emotional, but when combined with a new found sense of confidence as on this album, he transcends to new heights as a vocalist. His voice is the center piece of Katatonia's music, and he has embraced that responsibility completely on Last Fair Deal Gone Down. On songs like "Chrome", "We Must Bury You", "Clean Today" and "Don't Tell A Soul" he sings at a higher pitch than he has in the past, at times reminding of Maynard James Keenan of Tool. His emotional chorus lines within "Tonight's Music" and "The Future Of Speech" send shivers down the spine, perfectly achieving emotional expression and memorable melody at the same time. Indeed, it is not easy to listen to these songs without singing along with them, They invite you to do so.

Along with the overall confidence and power of the album, Katatonia experiment with a bit of technology. Within songs such as "Chrome", "We Must Bury You" and "Tonight's Music", the band incorporate subtle electronic elements to add color to their atmospheric expression. But before one starts to think that Katatonia have followed Paradise Lost into Depeche Mode worship, it must be made known that it is used very sparingly, usually behind a verse section. "We Must Bury You" is one of the strangest songs the band has ever come up with, as it uses electronic beats and nuances as its foundation. But rest assured this is the only song of its kind on the album and clocks in at under three minutes, allowing the listener to skip over it which in turn does not effect the flow of the album. Still, I do question its' placing as the third track and I am left in wonder as to why this was included on the album instead of a song like "Sulfur" from the Teargas EP.

Once again, photography and design were handled by Travis Smith, and once again, it is highly effective. Images of vacant city streets, natural and industrial decay, and abandonment decorate the booklet and act as compelling visuals to the musical expression, a soundtrack to the desolation of empty nighttime cityscapes, the heavy stillness of night and its piercing silence. Blessed with a powerful production courtesy of Skogsberg/Sunlight, Last Fair Deal Gone Down is thoroughly impressive from beginning to end. As I said before, the band has taken their sound to a new level, one that holds much potential as far as exposing Katatonia to new audiences. I firmly believe this is one of the best bands in current music and feel that this album has limitless appeal to audiences that have no idea who Katatonia is, perhaps fans of Tool/A Perfect Circle, The Cure and Type O Negative. If someone was to take a song like "Teargas" and sneak it onto mainstream rock radio stations, I am convinced that it would be met with positive responses. On the other hand, perhaps Katatonia's music is too emotionally heavy for your everyday mainstream rock fan.

But all of this speculation means nothing really, for the bottom line is that Last Fair Deal Gone Down is Katatonia's best work to date and I highly doubt that I will hear an album this year that tops it in terms of emotion, songwriting and overall presentation. There is a sticker on the front of the CD case that says "Possibly the best Peaceville album...ever!". I only slightly hesitate removing the word "peaceville" in that statement...
Written by Allen | 18.09.2003