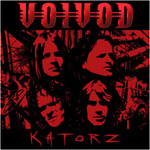 Katorz is Voivod's fourteenth release and sadly the first one not to feature the band's legendary axeman Denis "Piggy" D'Amour. Although Piggy is no longer with the band in person due to his untimely passing in August of 2005, his presence can still very much be felt in the music on Katorz. This is because the band uses guitar tracks recorded by him prior to his death. Therefore, Katorz is a de facto tribute to Piggy and should be treated as such, instead of an entirely new Voivod album.

Still, even if this were a normal Voivod release, it would be a very good one. The band remains on the path that they were on 3 years ago, when Snake rejoined the band and Jasonic took over the duties of a bass player. Once again, we are treated to quirky, mid-tempo, sci-fi themed thrash with a lot of attitude. Basically, this is Nothingface sort of stuff adapted to the new millennium, and.. its great! The performance is top notch and some of these riffs wont leave your mind for weeks ("Odds And Frauds", "The Getaway", "Dognation", "After All"). Snake's vocals hit the perfect compromise between aggressiveness and melody, while Michael Langevin is still one of the most underrated metal drummers ever. Piggy's guitar parts are just as innovative as ever and it would have been a great shame if the band decided not to include them on this album.

I do not feel that it is suitable for me to give this album a rating. It is a tribute to a great musician and giving it a grade just seems like an insult. Instead, I'm making Katorz a "Jup's Pick". This is a great album, get it when its released and enjoy it! What better way is there to celebrate Piggy's talent?

Written on 25.05.2006 by
jupitreas
With Metal Storm since 2002, jupitreas has been subjecting the masses to his reviews for quite a while now. He lives in Warsaw, Poland, where he does his best to avoid prosecution for being so cool.
More reviews by jupitreas ››