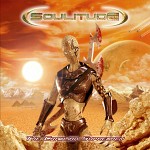 
You may not know Jevo yet, but believe me, after you read this review, you will! He's not a guitar hero, as he keeps repeating, but he plays guitar in Valhalla, a Spanish heavy power band, and he occasionnaly releases some (free) albums of his own. Soulitude is his latest project, featuring lots of guest musicians and vocalists, and it is probably the best! And yes, "The Crawlian Supremacy" is available for free download at his website!

Now with such an enthusiastic introduction, you probably guessed I love this album. This power metal project has achieved something fantastic, something I have dreamt of listening to one day. To sum up, this is a 100% power metal album that incorporates passages reminding of other metal genres, such as thrash, black, etc. I was really amazed when listening to "Enslaved", the first song. Not only this variety brings even more dynamics and interest, but it's so well used that the music flows seamlessly.
And my excitement lasted till the very end of the album, through the thrash intro (similar to what would be a heavy version of "Blackened" by Metallica) of "Menace Of The Universe", the oriental melody of "Dunes Of Mub'Arass", the instrumental "Solar Ghosts" (featuring similar keyboard sounds as Turilli's second album before getting into some more Gamma Rayish kind of guitar melodies), the Iron Maiden-like bass break of "Trip To Helgnord", the intelligent use of female and black metal voices in "Viking Pride", the thrash/black riffs and vocals of "The Oracle", the cool keyboard intro of "Dawn Of War", the Star Wars Emperor theme in "March Of The Crawlians", the acoustic passages (or is it keyboards) of "Time For Deliverance", and the final track "New Age".
And yet, I have only chosen to give you one aspect of each of those songs! I also have to tell you that all those tracks are really power metal and you'll find (excellent) guitar harmonies in all of them as well as choruses to sing along.
There's a bonus track, the cover of "Fast As A Shark" by Accept, which is probably the weakest song of this concept album about planet invasions.

What else can I say to have you download this album as soon as possible? Hum, well, if you're into power metal, you should have no problem enjoying the album, but if you aren't then it may be good to check it if you want to understand the good sides of power metal. I truly see this album as an evolution in the genre. Of course it's not the first time an album mixes genres, but I repeat, this album clearly remains power metal, but power metal brought to a higher level.
Also, if I was one of those guys who give 10 to everything, I would have given this one 11 or more, but I tried to be realistic and I didn't even took the fact it was completly free in my rating.

So, are you really willing to ignore Soulitude's "The Crawlian Supremacy" when it is offered to you? Do yourself a favor and click the link below!