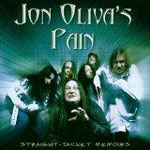 
After an amazing first album, "Taj Mahal", the great American compositor Jon Oliva is back with his new release "Maniacal Renderings", always through the German label AFM Records. If you don't know yet who is Jon Oliva, I will just ask you to have a look on the whole Savatage's discography and you'll probably understand how influential this man can be.

"Taj Mahal" was a beautiful piece of music. Full of poesy, this record of Progressive Metal, evidently influenced by the music of Savatage, was one of the best surprises of the year 2004. "Maniacal Renderings" follow this way, even if, let be honest, the surprise will not be here this time. But if you still like Metal mixed with beautiful parts of piano (a bit in the vein of a Bohemians Rhapsody if you want to have an idea?) organ and keyboards I'm sure that you'll like this album.

If I must talk about some songs, I will say that "Through the Eye of the King" is a pure Heavy Metal song with a big heavy riff that uses a catchy tempo with in addition some amazing guitars soli, when on the other hand, "The Evil Beside You" is at the opposite a bit less Metal especially in reason of the numerous part of piano mixed with a tender melody. But in general it never lacks of emotions and poesy and that's the force of this band. Evidently Jon Oliva's particular voice helps a lot to give those special emotions but this is also the great originality of his music that will give you a special feeling. This is simply unique.

When it comes to the others band members, I can tell you that they are to performers. I was this summer in a Metal festival in Spain and in reason of a problem with his plane, Jon Oliva has to cancel his performance in the afternoon and was replaced by his musicians who was already there. The guys played Hendrix; Deep Purple or Pink Floyd classics with an incredible easiness, it was simply beautiful. You have to know too, that the band had the luck to play later this day with Jon Oliva (who finally found a way to come to the festival) and the show was simply one of the best moments of the whole week end. Jon Oliva's Pain, this is not only good music on records, it's also amazing live performances.

We don't have any real surprises with "Maniacal Renderings", especially if you're already a fan of Savatage or a fan of "Taj Mahal" but this is a good album of progressive music in my opinion. Plus, nobody can say that it is not something unique, the music of Jon Oliva's Pain is just totally uncommon and never lacks of good ideas and original sonorities. Maybe not as good as "Taj Mahal", "Maniacal Renderings" is however a confirmation of the wonderful talent of this band.