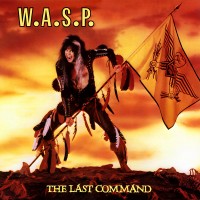 Throughout this album there is a great mixture of fun, sleazy party-hard songs such as "Blind in Texas" and "Sex Drive," great fist pumping chant-along anthems such as "The Last Command" and "Running Wild in the Streets," a ballad like "Cries in the night," and even something that very few so called "hair metal" bands could achieve: an epic, which is the track "Widowmaker." It shows such a great combination of straightforward rock n roll with deeper more grandiose songs which is why I think this album is the pinnacle for Blackie & the boys.

Though every album does have to have its weaker point, and for me that would be "Jack Action" throughout the rest of the album there is genuine passion behind Blackie's voice, even if he is singing about a troublesome bi-sexual nymphomaniac (Ballcrusher) but with "Jack Action"
the music seems to lose all soul and intensity. But whose to forget possibly the most famous song off the album (if not the entire W.A.S.P. career) "Wild Child," in which Blackie proves to be one of the most talented vocalists in metal. This song was originally written by Blackie to be performed by Motley Crue, but Vince didn't have the range to handle such a song.

For me the highlights of this album would definitely be the title track and "Rrunning Wild in the Streets." I admit I am a sucker for those chant-along, fist-pumping anthems, so naturally I fell in love with this album, and it now sits at my #2 spot for favorite albums of all time.