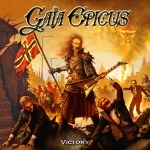 
Gaia Epicus are not really known for the originality of their albums. Yet, their Gamma Rayish power metal has always been highly enjoyable on their previous releases. However, given the loads of changes the band has had to face since 2005, what should we expect from this new album, entitled Victory?

First thing - though that's just an interpretation - is that we can guess the album delivers a message right from its cover (created by JP Fournier): this mix between Manowar's Warriors Of The World and Megadeth's The System Has Failed shows one metal warrior proudly standing on several bureaucrats. Is that the "victory" of the band over their previous label? Of music over business?

Recorded by a new lineup (drummer Ole Alexander Myrholt and bassist Hans Åge Holmen - replacing Yngve Hanssen after he unfortunately died in a car accident) for a new record label (Epicus Records, the band's own label) this album has got the "100% Thomas Hansen" trademark, as the mastermind behind the band wrote all lyrics and music for this third album. This, of course, means that the core of the music is unchanged and that we've got our share of power metal when listening to Victory, with songs like New Life, The Sign or Rise Of The Empire (about Darth Vader from Star Wars).
Yet, some songs include more thrash passages. In fact, some are clearly thrash metal: listen to Revenge Is Sweet and I promise you that you'll think a genuine Megadeth song has succeeded to make its way into a Gaia Epicus release! Thomas (who doesn't hide the fact he loves both Gamma Ray and Megadeth) even sings just like Dave Mustaine on this one, which also appears to be dedicated to their former label. Another example is Iron Curtain, starting with a riff reminding a bit of Seek And Destroy and ending with a 3-minute instrumental passage where two basic thrash riffs alternate in a perfect way (severe headbanging time ahead!) while the other guitar performs various leads and solos.
I could go on like this with other songs, like Awaken The Monster and Through The Fire but let's sum it up to the fact that the album is a lot more interesting than what I've heard of Gaia Epicus so far. Even the production is better, mostly because Thomas' voice has improved in terms of assertiveness and that we can hear the (excellent) bass work better.

I'll conclude by saying that Gaia Epicus' third album is really entertaining. It's fun to listen to and fun to play (I couldn't help but to take the guitar and play along with the CD). Even if it still is quite unoriginal and that you may feel that "you've heard this before", Victory should please any power metal fan and perhaps some heavy and thrash metalheads. At least, I'm sure everyone will have a great time enjoying those songs in concert. Gaia Epicus still have to fight but they're on the way to victory!