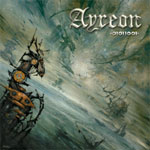 
How can I start this review? How many words will I have to use to talk about the new Ayreon? There are definitely too many things to say about "01011001", the new baby of Arjen Lucassen… I should maybe try to write a book about this album and the whole Ayreon story but well, I will just write a review and I promise I will do my best to explain what "01011001" is, and sorry if I'm a bit long this time round…

I don't really like to talk about the story behind a concept album; after all it's better to discover it when you listen to the album. I will just say a few words about "01011001" then… If you wonder why Arjen Lucassen has chosen the number "01011001" as the name of his new release, you must know that this is the binary form of the number "89" which is the ASCII code for the letter Y. The fans of the Ayreon project will probably remember the stories behind "Into the Electric Castle", "Universal Migrator" and "The Human Equation" and remember that the story of these concept albums is about humans (yes, us!) and the "Forever" people who live on the planet Y. A long time ago, those people forgot all their emotions and sent a comet on Earth with their DNA on it (of course it's pure science-fiction…) to re-create their race, pure and innocent. As you all know, the reality will be different for humanity, and "01011001", of course, deals with this "problem". "01011001" is full of metaphors and questions about human being conditions and ecology. Through a really good science fiction story, Arjen Lucassen asks a lot of questions about our world, that's what I call great lyrics.

The music of "01011001" is back to the futuristic mode. Sure, you'll always find some good Heavy Metal riffs with Folk elements but the "spatial" sounds are back and the keyboards and electronic sounds are really present on this release. All the songs (except maybe "Web Of Lies" which is cute but a bit boring) are catchy with great melodies, and I like that I hear a lot of different influences on them. As an example, the songs on which Jonas Renske sings are clearly influenced by the Katatonia spirit (if you like the new Katatonia, then you must like these songs!) and this is the same with the other artists. All in all, the music of this new Ayreon is not that fast (except with "Ride The Comet"), this is pure deep atmospheric Progressive Rock/Metal. The melodies are touching, the choruses are catchy, you just have here everything you need to enjoy a good moment, but of course you must love Progressive stuff to enter the music of this new Ayreon. "01011001" is not an easy album and is all but commercial, it is dark and sometimes even sad. The music on this release is beautiful and totally unconventional (I really have the feeling that I'm traveling through space when I listen to this album…).

The Ayreon project has always required a lot of guest singers but even if "Into The Electric Castle" (1998) was an amazing release, only "The Human Equation" started to amaze the world of Metal with such an incredible line-up. It was like impossible to hire better artists but I've known for long (I will keep for me the name of my secret informer hehe) the names of the singers and I can tell you that I was really looking forward to this album since that day… Just have a look at the line up of "01011001" and you'll see that this is probably the best one ever used for a Metal album. All the artists, singers as well as guest musicians, are leaders and monsters of the Metal scene and it was just impossible to be disappointed. Honestly there is nothing to say here, all the performances of the protagonists of this new Ayreon story are amazing, and I will especially talk about Jørn Lande and Daniel Gildenlöw who are for me two of the best singers of the whole Metal community and have just added all their class to the music of Lucassen. Also, don't worry I will not forget some people like Anneke van Giersbergen, Tom S. Englund or Jonas Renske, the former adding a really dark, Katatonia-like atmosphere to the music. All the singers are good, even Wudstik who apparently comes from the Dutch Hip-Hop scene and eventually proves to be an amazing Prog-Rock singer. If the singers are all good, the guest musicians are excellent too. I will always remember the memorable keyboard solo of Derek Sherinian on "The Fifth Extinction" and the guitar solo of Michael Romeo on "E=MC2". That's all good anyway and since Arjen Lucassen, as always, produced this released with the best means of production, it's hard to find bad points on this release. Even the artwork describes perfectly the spatial world of Ayreon… This is just top of the class, the "crème de la crème"…

"01011001" is an amazing album. Poetic, tender with everything we need when we like listening to Rock and Progressive music. I can understand that some people dislike Arjen Lucassen's works but they just have to remember that it's a just a matter of taste and there is no reason to be jealous of the success of Ayreon since all these releases aren't similar to (and can compete with) anything else. Ayreon is unique, indeed it is hard to enter that kind of music, so if you can't do that just live with it, after all Ayreon music will never hurt you, right? With "01011001" Arjen Lucassen is back in the cosmos and that's great to follow this space and life odyssey one more time. "01011001" will undoubtedly be one of the best albums of 2008, one more time it's just good to listen to this music. "01011001" is a masterpiece and I hope that people will remember all these songs for the centuries to come… The lyrics of "The Fifth Extinction" end with the words "We're alive"… That's right Ayreon is alive and more than ever…