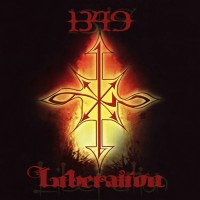 
A band, mostly of people that were in a ton of side projects and underground obscure black metal bands from the early to mid 90's have came together into one big band, under the name of 1349. The name 1349 is rooted supposedly with the year that the Black Death or Bubonic Plague came into Norway, which is where this band hails from. Fronted by Ravn and with a very popular drummer from Satyricon, Frost, this band does nothing but put out generic black metal with an intense indulgence on speed. Their debut album is nothing shy of that. Starting off with the track, Manifest which is layered with intense drumming, obscure guitar riffs, and the growls of Ravn, it lays down what the rest of this album will have to offer.

From time to time, you will notice that Frost doesn't use triggers, its all the work of his fast hands and feet, as you can tell by his speedy blast beats and deep drum rolls. A lot of good things did come out of this release, a new threshold on how fast you can take Generic Black Metal and how intense the drumming can become. Another thing is, well they cover Mayhem's Buried By Time & Dust, which, to my ears sounds a hell of a lot better then Mayhem's original with Attila on vocals. There are a few great tracks on this album, but a majority of the sound is the obscure guitar riffs and the machine gun drumming of Frost, without those two key elements, this would be your average run of the mill Black Metal.

Stand out tracks to my ears - I Breathe Spears, Buried By Time & Dust, and Evil Oath

I give this a 7.5 out of 10, due mostly to the generic qualities of it. Nothing special, but nothing below average of even just average, just another threshold setter.
Written by Prugor | 02.06.2004