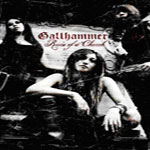 London Show
10. Hallucination
11. Blind my Eyes
12. At the Onset of the Age of Despair


Everybody knows here that I'm not the first supporter of the Japanese band Gallhammer. I'm still wondering today how so many people talk about this girl band… Well obviously their last album was better than the first one but it was not enough for me to become the first fan of this combo and their first official DVD will not change my opinion even if, let's be honest, this is a good product.

For sure, the show is really well recorded and this is the main force of this DVD. The images are great and the general ambiance of the concert will perfectly be visible on your TV screen. "Ruin Of A Church" is a nice DVD really professional and the show of the Japanese girls is not that bad really. Well ok, they're not so active on stage but they have charisma and they know how to play their songs (which is not so hard that's right…). The only little problem here is that it's still Gallhammer music which means that you'll not listen to the best compositions ever released but it's grim and necro and all the ones who like to listen to tortured and slow dark Metal will probably be happy with this release. Personally I still have a lot of problems with this music but I must admit that the songs of "Ill Innocence" are nice here and if the girls follow that way, maybe that their popularity will not be usurpation anymore.

The DVD is complete and features a full length show plus an interview and some good bonus live footage. The quality of these footages is not as good as the concert but it's ok and it's a good addition. In the end, "Ruin Of A Church" is a really good production, something that only some few labels like Peaceville are able to give to the fans of their bands, I must congratulate the band and their label to propose such kind of product.

I will not rate this DVD because the difference between the quality of the product and the quality of the music is so big that the rating would be false anyway. Let's just say that the fans of the combo should buy it asap, this is a complete release with a really good recording and a lot of good features. The only problem comes from the music, which is clearly a love or hate one… You know what to do now, if you hate Gallhammer, go away as soon as possible (though with a bit of honesty I must admit that the girls are becoming better and that their Crust is not that bad now… but not fantastic too) but if you like the band, don't miss this beautiful piece of work.
Written by Jeff | 05.07.2008