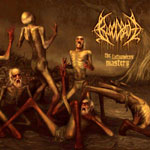 
The mighty Bloodbath is back. I'm sure that you all already know their previous EP "Unblessing The Purity" but today of course we will not talk about it and only focus on the really awaited new album "The Fathomless Mastery". I like Bloodbath and I like its members so really one more time I was expecting something great and one more time I'm not disappointed. Fan of real Death, this release will be a must again!

I think that I'm probably repeating myself but what I like the most with Bloodbath is this really great ability to do old school but modern Death Metal. "The Fathomless Mastery" is one more time a real album of Death Metal, not something a la In Flames or whatever but even if it's old school Death it doesn't sound outdated. At the opposite all the songs are really modern catchy as hell and be sure that one more time the riff machine perfectly works. I could talk about each songs of the album but it will be useless so all in all I will just say that "The Fathomless Mastery" features excellent riffs and guitars soli. The drums of Martin Axenrot are pure blasts, this is impressive really, but all the other members of course do a great job especially the guitarists (and I won't forget Jonas Renkse who is of course one of the main song writers of the combo). The album is not especially varied but from the beginning to its end all the tracks are powerful and you'll not find any let-down or breaks, "The Fathomless Mastery" is a real Death Metal machine, a real hurricane!

Some of you probably wonder if there are a lot of difference between the performance of Mikael Åkerfeldt and the one of Peter Tägtgren. Well to be honest I don't really like this little war between some fans who want to prove to the others that their favourite singer is better than the other. Honestly I think that both are great, they have differences in their voice and way to sing Death but it's definitely not problematic and I really think that Åkerfeldt just does a great job here. He is a great Death Metal singer and I love his voice which is simply perfect for the genre. Add a great production and a cover which is not particularly beautiful but which fits perfectly to the tortured music of the band and you can be sure that you'll be happy with this new Bloodbath.

"The Fathomless Mastery" is one of the best Death Metal albums of the year 2008. Let's just hope now that they will still release new albums and that they will all finally decide to organize a real tour. The concerts that they have played at Wacken and Party San cannot be the "last" ones, so please guys find a way to tour together after Opeth's world tour and we will be entirely satisfied. "The Fathomless Mastery" is a new accomplished album and this is highly recommended for all the Death Metal fans.