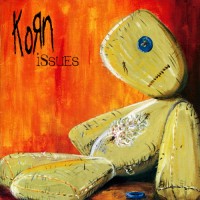 
Korn is a controversial topic among metalheads. The band is hated by lots of people, yet it is still respected by others for getting many fans into metal, and also because of their first releases, which are much more appreciated than the later works. "Issues" is the last of Korn's classic albums and at the same time the first one to be closer to alternative metal instead than the rap stuff from the previous albums. The band was able to release a good album even when they were at their highest point in the mainstream world, after another Billboard-and-that-kind-of-stuff hit "Follow The Leader".

With "Issues", Korn did something completely different from what they had done before. At the time, "Issues" was the most melodic of Korn's albums, even more than its predecessor "Follow The Leader", which was itself quite melodic when compared with the first two, and also because its strong rap influence. "Issues" actually parts ways with that rap stuff. However, it still has some old-Korn aggressiveness - songs like "Somebody, Someone", "Wake Up" or "Beg For Me" still have those heavy riffs, those percussive bass lines and those powerful drums. But there is a synthesizer overdose - almost every song on this album has electronic passages, and even the vocals and the instruments sound electronic in some songs. These synthesizer elements give "Issues" a very unique atmosphere, making it clearly different from the rest of the albums. This album has also many short fillers, including "4U" which is, ironically, one of the best tracks of the album.

As it was an album for the mainstream, Korn and Brendan O'Brien made a very good job while producing and recording "Issues". It has very good production, all of the instruments sound clean, though the performance is not that good. With this synthesizer overdose I was talking about, it seems that there's too much stuff in different passages throughout the album. Therefore the band has never been able to make a really good live performance of such songs like "Make Me Bad", "Trash" or "4U". Nevertheless, "Issues" is still regarded as one of the best albums by the band from Bakersfield and I would dare to say that every work of theirs that came after this one didn't manage to live up to "Issues" and its predecessors.