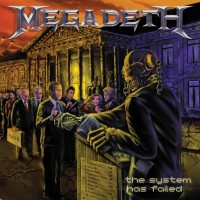 
Ahh Megadeth... This wonderful band used to be my favourite band with Metallica until they released Risk and lost my interest. I then did not even give The World Needs A Hero a chance, it wasn't really worth it anyway, although better than crappy Risk. I didn't expect anything from the 'album of the great return', The System Has Failed. I had heard the song 'Kick The Chair', which was interesting, with good thrash riffing despite the lack of aggressiveness in the vocals. But they had sort of lost the flame in my opinion. Now I've listened to the whole album like thirty times, and I've reached a conclusion: oh damn, I'm sorry, I was wrong, I won't criticize a band blindly ever again... This album is brilliant.

Ok, it's still not Rust In Peace material, it's more in the vein of Youthanasia and Cryptic Writings, and there are undoubtedly some flaws. The vocals, as I said before, lack a bit in aggressiveness, except on 'Blackmail The Universe' and 'Truth Be Told' on which I recognize Dave's filthy voice. Some songs are just Risk-like, hence boring and below average ('Of Mice And Men').But for the rest, it's a really good album that makes me gain interest in Megadeth again. Something to add, the good guitar playing of Chris Poland (yes, the guy that used to play in 'Deth before Rust In Peace) and the return of Nick Menza behind the drums (it's not something you notice, but it's still pleasant to see the 'Great Ancients' back).

The System Has Failed starts off with 'Blackmail The Universe', with its old-school thrash riff and a good dose of anger through the song. 'Die Dead Enough' is more melodic, in the vein of 'Angry Again' (Last Action Hero OST), with an extremely catchy chorus that makes it one of the best songs here. 'Kick The Chair' is a thrash anthem that brought me back to the period of Countdown To Extinction, although I said before the vocals are not aggressive enough. 'The Scorpion' is the strangest song, almost commercial, could have been released on Risk, but the chorus is so great and catchy that it's finally probably my favourite song. It's not over yet, there is a lot of good tracks on The System Has Failed. 'Back in The Day' is reminiscent of 'Holy Wars' (Rust In Peace) in the vocal line, it's the track that is going to reconcile Mustaine with his old fans. This one is the greatest thrash song he's written since Countdown To Extinction. 'Truth Be Told' is in the vein of Youthanasia, with the same kind of heavy/melodic but accessible tunes. Great one again. The rest is more average, but it's still above the level of Risk and The World...

MEGADETH IS BACK MY FRIENDS, and hopefully they'll stay here for a long time. With songs of the quality of 'Back In The Day' and co, no doubt we'll hear from them again. Meanwhile, you all really should give The System Has Failed a chance. I bet you will be pleasantly surprised.

Highlights: Back In The Day, The Scorpion, Blackmail The Universe, Die Dead Enough, Kick The Chair, Truth Be Told
Written by Deadsoulman | 06.09.2004