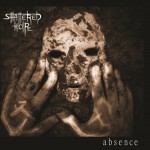 
When last we left Shattered Hope, I was asked to review their 2007 Promo... a two track, 20 minute release morphing of traditional doom with some death/doom vocals reminiscent of Officium Triste.

Most of the tracks in Absence follow the same basic trajectory as the tracks found in their Promo 2007...they are over six minutes in length, are sloooooow, feature a few shifts in riffing during the song, some quieter bits, and some harsher moments. The track "Enlighten The Darkness," the lead-in track on the promo is also found on Absence, only re-recorded and is a great point of comparison to show how the band took their style and were able refine it and take it, essentially, to 'the next level'.

But that is not to say these Hellenic purveyors of melancholy don't have a few tricks up their sleeve. The track "Yearn" is a scant three-minute rocking midpaced piece which feels almost twice as fast after listening to the first 30 minutes and three songs their slow-motion, 5bpm avalanche of doom.

They slow things down with another prolonged death/doom number before mixing it up with the perfectly named "Lament, In F# Minor", a near three minute piece of somber beauty featuring violins, cello, and a bass fiddle with piano accompaniment. I think my biggest lament in regards to this piece is it ends too soon.

The album closes with another wonderful track, one that does not, like it's predecessor, end too soon... "The Utter Void" clocks in at 18 minutes. It is an ambitious piece, which sees the band encapsulate their various sub-elements into one giant epic. The track leads in with the beauty of "Lament", shifts to powerful mid-paced riffing, before collapsing down to silence and piano for a spell, then launching anew into slow paced doom, finally closing with a splendid melodic guitar lead/harmony. You know the kind, the one that somehow, without word, conveys the feeling that this is all coming to an end. It's over.

Also of note, Absence sees guest vocals by Jo "Marquis" Thery of Ataraxie in "Vital Lie" and Thomas A. G. of Saturnus in "A Traitor's Kiss."

All said and done, their first full length represents a triumph for the band. They've managed to do a wonderful job in both constructing songs as well as showing various sides to their creativity. Shattered Hope were the first unsigned band that I did a review for, a pleasant surprise, so I've had a bit of a soft spot for them. As the saying goes, in regards to the band, "Absence makes the heart grow fonder."