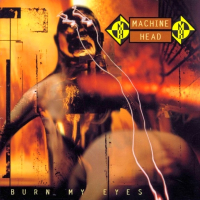 This is the scenery, this is the reality. Welcome to the experience that visioning Thrash Metal through Machine Head's burned eyes is. Zenith of a relatively controversial fusion of conservative postures and modern approaches (which doesn't always have to mean alternative), I still get impressed of how successfully heavy and intense this album is, several years and listens later. During that time much has passed but its essence persists, which is, by itself, a fact that makes anything not recent interesting.

And who can deny the quality of this start? Certainly not anyone who understands the logical evolution Machine Head developed or, at least, is reasonable enough to separate this from their following stage of "The Burning Red" and "Supercharger". "Burn My Eyes" is a massive bombardment of energy on our ears.

As "Davidian" begins there's nothing to feel but surprise. Drums role in, riffs start gigantically and Flynn's cruel tone take this hymn to the famous line "let freedom ring with a shotgun blast!". The speed rises later and, with a deep short scream, like someone does after being punched in the stomach, there's some final furious but slow riffage. This is one of the best Thrash Metal songs ever. Continuing, "Old" is next, again full of charisma and aggressiveness but also more groove, like it is throughout most of the songs. Next, "A Thousand Lies" is fast and has a great solo. "None But My Own" and "The Rage To Overcome" are less explosive but more dynamic and somewhat psychotic. The weird altered voices in "Death Church" are the prelude to an obscure chorus and the song overall sounds oppressing, even if unmistakably part of this album. "A Nation On Fire" isn't very different, until a later sudden charge of violence. In the 8th assault it's like we go back to "Davidian", which works very well after the slower and less in-your-face part. In the same logic, apart from the rather emotional initial verses, comes "I'm Your God Now". The following one is "Real Eyes, Realize, Real Lies". I hesitate to call this one a mainly instrumental track, there's a main riff and over it there are several different dialogues coming up. Anyway, to end, "Block" is frenetic and convincing.

Like them or not the power imposed is incredible and their great rhythmic sense just makes them more creative and captivating. A competent execution with a contemporaneous vision for an inexorable result. "Burn My Eyes" brought immediate fame to Machine Head and that's easily understandable right after just one listen.
Written by Passenger | 04.01.2005