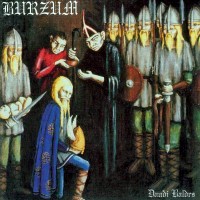 
Dauði Baldrs is Burzum's first album after Varg Vikernes got arrested; and as such it is the first one that was written exclusively in prison. Because he had no access to any other instrument, Varg could only use a synthesizer to record this album. Additionally, it is said he recorded the whole album on a simple tape recorder in his cell.

The album itself is centered around the death of the norse god Baldr and his legacy. As the song titles suggest, it is focused on the concept of the coming of Ragnarök, the final battle before the destruction and rebirth of the world.

The sound of the album can be described pretty easily: it is nothing more than dark ambient music performed with a synthesizer. However, it manages to deliver an extremely dim and gloomy atmosphere, sinking the listener into a cold, black abyss. Very repetitive and sometimes quite minimalistic, Dauði Baldrs attemtps to hypnotize the listener with its black chords and frightening melodies. Dauði Baldrs breathes out despair and loss, but with a magnificent touch of epicness.

Speaking of minimalism, one track merely has two (!) different melodies playing for over 10 minutes. Nonetheless, don't think for a second that it is dull or boring, on the contrary, it has such a haunting feeling around it that you might think you are in limbo between life and death.

There are many reasons for getting this album. It is a huge change from the Count's earlier releases and it certainly reflects his thoughts after his improsonment was pronounced. If you are interested in what was going through his mind, the concept of Baldr's death, or if you just want to relax and close your eyes for a moment, "Dauði Baldrs" will transport you into realms you've never been to before. Highly recommended.