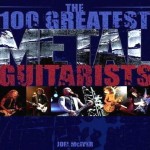 
Metalstorm, may I present to you what may very well be, THE most controversial book you've EVER read in your life (as far as your interest in metal goes), Joel McIver's The 100 Greatest Metal Guitarists. Oh, and let's save time: Dave Mustaine (of Megadeth) is number 1, beating John Petrucci (of Dream Theater) in second and Jeff Waters (of Annihilator) in third. More info about this book can be found here. Now, let's begin.

Just to make sure I'm clear with you guys, it's just a book about guitarists. To be the first one to talk about guitarists specifically in metal grabs my attention and should grab yours as well, but there are some grammar mistakes that are pretty stupid for a man of his profession/experience to make (for example, it's the DROVER brothers of Megadeth, not GROVER). His reasons for each standing, though, are very precise, being very diverse about which genres of metal have the best techniques and such (mostly this list consists of bands in extreme metal: thrash, doom, death, etc.) and he gives some very good points in mentioning albums that aren't really good but demonstrate some really good guitar technique at times anyway. But this is coming from a guy with little to no knowledge about or experience actually playing guitars.

I'm disappointed at guitarists that I personally think should be higher on that list and aren't, and people that shouldn't even BE on the list and are. On the other hand, there had been musicians that I've listened to before but don't anymore, and to look back upon them as I read this book, it made me acknowledge their skills (biggest example being Matt Tuck of Bullet For My Valentine and James Hetfield of Metallica), while on the other hand, it helped me discover new guitarists that I haven't even heard of, and through thorough research on Youtube, I've discovered even more guitarists to look up (like Christopher and Michael Amott of Arch Enemy).

With all compliments aside, this book is biased. Completely biased, but not from a typical musicians biographies point of view. This is a third party view in which the person writing is a neutral party, so whoever is the best guitarist becomes pointless and even though you got Dave Mustaine as the best metal guitarist, you're not going to win many votes with other metal heads. On the other hand, any aspiring musicians (specifically guitarists) would learn a lot from this book (as well as subsequent research on youtube) to develop a promising technique in the future. So, apart from skill developing from this book, you'd be better off getting it from a friend or a library.
Written by ProjectEndgame | 06.01.2011