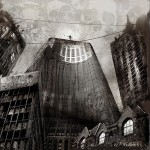 
...And then a challenger for grindcore album of the year appeared.

In case you clicked this review thinking 'Maruta? What on earth is a Maruta?' well, I did some research for you and Maruta is Japanese for "killer shit that is guaranteed to rip you at least one new asshole". This Florida-based grindcore outfit already blew up a few skirts with their debut, In Narcosis. But their name got forever inscribed in the annals of metal as "the band who got Trivium 25% better" when, of all bands, their drummer joined said boysband bastion of musical creativity.

In the meantime, the band recruited an ex-Nailshitter drummer and also added a bass player to their ranks while they were at it. And then they released Forward Into Regression and destroyed the world, as foretold by Nostradamus.

If we're being formal, Maruta play a blasting mash-up of grindcore and tech-death. No worries though, this album will still shred your pimple-ridden face off, effortlessly. The tech-death hooks do make the album a little less straightforward, yet all the more crushing at the same time. Above all, this little motherfucker sounds heavy-as-balls, ridiculously tight and pissed off to no end. Maruta are psychos with class, what other explanation is there?

Seriously, my ears haven't been this pleasantly fucked since the days I was an altar boy.

I could write a lot more... but this album kicked my ass so hard I think I need to go see a doctor. In short, this rules, hard. Now go buy this album wherever albums are being sold.
Written by Thryce | 28.03.2011