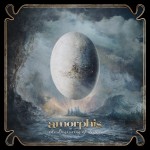 
Amorphis have to be one of best and at the same time most loved bands from Finland. Actually, the only time they let me down was with Far From The Sun, the last album with Pasi Koskinen behind the microphone. The future of the band in the eyes of their fans was quite uncertain, but Tomy Joutsen came in like an earthquake and blended in a unique way with the rest of the band. Eclipse and Silent Waters prove it. Skyforger was good, just good. A bit more appealing to the common listener, hence the band left behind the grunting vocals to a big extent.

Two years later, Amorphis return with The Beginning Of Times and dare I say it's the more inspired and powerful little nephew of Skyforger, or to be more precise, it's the blending of Eclipse and Silent Waters' melodic and dynamic at the same time vibe with the more appealing essence of Skyforger. Nowadays, as i look back into it, their previous work was like a "necessary" step back for the band which actually helped them move two steps forward.

Beautiful leads and solos appear every now and then expanding the already atmosphere-evoking role of the keyboards while the static heavy riffing sets the foundation in perfect harmony with the rhythm section. Psychedelic melodies and the traditional elements Amorphis always embedded in their sound pace wonderfully together in the overly atmospheric/melodic tone of the compositions. Joutsen proves once again with utter simplicity what a great and charismatic interpreter he is, ranging from heart-felt singing to more dynamic forms of melody to finally reach a climax of grunting orgasm.

In the end, The Beginning Of Times seems to possess their fourth great cover in a row whereas at the same time, despite being very good, superior to its predecessor and more inspired in one hand, on the other hand it's nothing really new and I'd really like to see them experiment a bit (once again) in the sound they forged since Joutsen's arrival. Still, they have my admiration for remaining a decent band in a cruel music world we all live in, but I think the time has come for something more (once again), some progress (drastic or not).

Highlights: My Enemy, Battle For Light, Soothsayer, Song Of The Sage, Beginning Of Time.

Written on 15.06.2011 by
KwonVerge
"It is myself I have never met, whose face is pasted on the underside of my mind."
More reviews by KwonVerge ››