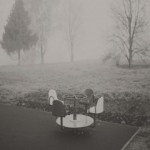 
Ascension marks the first Jesu album since 2007's Conqueror. Don't let the four year gap fool you, they have been busy beavers. Over the last four years Jesu has put out five EP's, a split with Battle Of Mice, and Infinity, a release with one song that lasts nearly 50 minutes. The period has seen highs (Opiate Sun), mehs (Lifeline) and lows... last year's Dethroned, which ended with the aptly named "I Can Only Disappoint You."

Ascension sees the band carrying on in much the same way they have the last five years. Pleasant but melancholic fuzzed-out shoegazing post-metal while Justin continues to use his weak, sing-songy spoken voice rather than the harsher tones of the Godflesh days.

The strength of the band project is the ability to turn the vaguely formulaic into honest and heartfelt quality songs. Opiate Sun delivered, whereas Dethroned fell short. This album oscillates between the two, trending slightly more towards their fantastic '09 EP.

For every Jesu-mediocre track, like "Birth Day", there seems to be a sublime answer, such as "Sedatives" or "Brave New World", which contains a nice vibe courtesy of Broadrick, but is really anchored and carried by a more aggressive drumwork from Ted Parsons and bass rumblings courtesy of Diarmuid Dalton. As with the strengths of Opiate Sun, their interplay adds a bit of a darker and more powerful edge to the songs. Kudos to them, as their importance is perhaps undervalued by many, including by me in my review of the oft mentioned Opiate Sun EP. (Stupid BitterCOld, stupid!)

So for those of you familiar with the band, Ascension offers about what you would expect. There aren't any huge surprises or sudden left turns. If you like what you've been hearing from their fistful of EP's, you'll most likely find this album enjoyable.