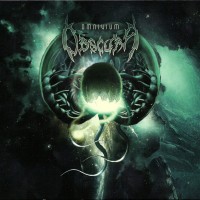 
Omnivium is the latest offering from technical death metal quartet Obscura, and while I admittedly am not extremely familiar with many bands in this genre, it's safe to say that this album is quite an impressive showcase of talent as well as a listenable and well put-together piece of music.

The album starts off with a very strong track, "Septuagint". The acoustic intro indicates that some attention is being paid to creating atmosphere, which is a good sign. It then seamlessly moves to an electric riff similar to the acoustic intro and then the technical insanity begins. The riffage has a good melody to it and a very fast speed, the drums are being pounded at lightning speed and the bass adds just another layer of depth to the music. Yet within the speed and intricacy of the music, it isn't too hard to follow and it all flows very nicely. The performances on the whole album are very impressive, and while there is often pure showcases of talent, the songs have coherent structure most of the time and it isn't just showing off. The guitar solos on songs like "Septuagint" and "Velocity" are simply amazing, and the technique being used is not easy or simple stuff. Jeroen Paul Thesseling's bass is great, and really adds depth and interest to almost every track. Hannes Grossman lays down super fast beats as the backdrop to the chaos at most times, although, there are slower parts in many of the songs. This was refreshing at times, and the album didn't just suffocate you from start to finish. The album found a good balance between showing off too much and a structured piece of music because there was a lot of pure talent in the spotlight but it didn't disrupt the progression of the songs.

So, the performances and songwriting were both top notch in most cases on this album. The only thing I found to be fairly standard were the vocals, which isn't a big problem, but just don't expect them to be as impressive as the instrumentation is. The lyrical content is quite interesting, as I found myself thinking about the meanings of these songs even after listening to them, and they are all based on a unique concept to begin with, "Nature's connection with the spirit world" (the album is based on a work by German philosopher Friedrich Schelling).