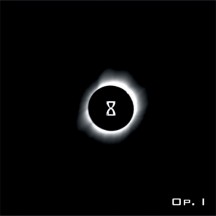 
The last time I checked, Croatia wasn't known for its good prog/death metal bands. But if you turned over the rock of hidden gems, you would find Insolitvs there.

Emerging with their first EP, Op. I takes you on a trippy journey, as if you were taking a pill and going into a new dimension. The song titles and the cover seem to point to that analogy; the music certainly does, or maybe it is just a weird predilection the band has for colours, numbers, and infinity. Either way, Insolitvs display a mix of instrumental progressive death metal and traditional acoustic tunes. Being both hypnotic and dense, their music is fueled by melodic, aggressive and technical riffs, with typical sudden changes of pace and ferocious surges of distortion.

Starting off with the bass-driven "Grey 4.15", which lulls us into this hallucinatory state, and followed by "Yellow 5", the first big explosion on the album, the cards are immediately laid on the table and Insolitvs waste no time. Both "Grey 4.15" and "Red 6" incorporate a folk use of the acoustic guitar, with a Latin scent in it. But the fast-paced paranoia and unpredictability of "Green 4" and "Yellow 5" are the best examples of the dynamics of the band.

The transitions between the two poles (clean and extreme) are strategic when you blend these two genres. Nevertheless, they don't seem to flow as smoothly as they could on some of these songs. While the tempo shifts in the same song come naturally to Insolitvs, the hasty introduction of acoustic guitars might feel out of place, which doesn't mean they don't know what they are doing. It just might be a case of finding the right timing to introduce changes without causing a break in the sequence. But clearly, they are in control of their instruments and talented enough to create a meaningful listening experience, which is not easy to achieve with instrumental pieces as the mind tends to go astray.

The journey ends abruptly with "Orange 5.15" as if you were hitting down in reality again. And even though Op. I might not be the epitome of originality, that doesn't take anything away from the songs. After all, this is only the start for the band and the fact that some of these songs sound so polished and strong is a good indication of what they can do in future releases.