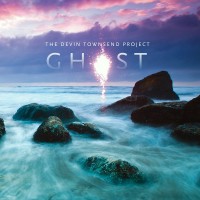 
Devy without the Hevy leaves you with a surprisingly enjoyable experience, Townsend sheds his manic industrialised progressive metal and unleashes a calming flow of soothing tunes on Ghost. The difference between the two "project" albums this year is staggering, Deconstruction is a completely shameless exposition of the mastermind's inner quirkiness, whereas Ghost is nothing of the sort. You're in for a tranquil 70 minutes to say the least, the meaning behind the album title becoming apparent for all its ethereal atmosphere.

Dare I suggest that this album displays Devin's very best vocal performance; he seems right at home in this softer ambient world of his own creation. Amongst the wonderful sounds of flowing water, Townsend's acoustic delivery and the wondrous flute work of Kat Epple interspersed throughout, the listener should find some very easy listening ahead of them. Perhaps, however, it is a little too easy; while it all sounds very nice it tends to feel drawn out to the point at which boredom is likely to set in before too long. The focus on an album full of ambiance certainly pays off, yet it wisps by without leaving all that much of an impression. It's one of those albums you may enjoy very much while listening, but beyond that any recollection of the material after having heard it is limited.

There are exceptions to this fact, like the clear highlight "Feather" which extends for over 11 minutes and of which much is memorable. There is no real purpose for this album beyond establishing an atmosphere, which it certainly achieves. Yet if often feels aimless in its whimsical meanderings, something which may excite some listeners while frustrating others. It may appear a naturally conceived attempt at crafting an aural environment which captures the attention in a loose and indirect fashion. On the other hand this intention might come across as forced, and this is where the album suffers somewhat. Its focus on atmosphere and ambient limits its scope, while Devin shows obvious aptitude in songwriting of this kind, it shows that his term of endearment "Hevy Devy" exists for a reason.

The way in which the tracks on this album are constructed sounds as if they are primarily based on rehashed ideas which Townsend's signature sound has been known to cover. His work on albums like Terria or Ki are especially relevant here, taking the industrial/progressive metal infused atmospheric passages of those albums and reinventing them to make them fit to a more ambient inclined frame. Fundamentally this involves the removal of any heaviness, the problem this presents is not the lack of any "hevy" side to your "Devy" but that this album is based on Townsend's songwriting style which does incorporate his trademark "hevyness."

This album exhibits the ability to create a successful piece of music that appears to go against all that an artist has achieved previously. At its core, however, this album is not far removed from Devin's past material, it's simply fine-tuned with an aim for the purely atmospheric.