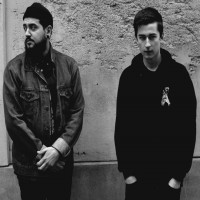 After releasing debut record - An Oblivion Above - a year ago, Swedish duo Together To The Stars have already done a major part of work on the successor. The second full-length effort was recorded recently and is currently in the phase of mixing. More details to be unveiled soon. Stay tuned.

Courtesy of the band's Facebook page; both photos taken during the process of recordings