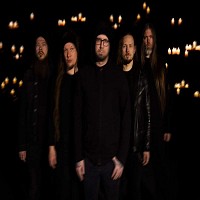 Finnish doom/death outfit Kuolemanlaakso announces the release of the three-song EP Kuolleiden Laulu on December 16 via Svart Records. The EP contains songs recorded during the same sessions of their LP Kuusumu which was released in March. Like the LP, it features Aleksi Munter (ex-Swallow The Sun) and Lotta Ruutiainen (Luna Kills) and was produced by V. Santura (Triptykon, Dark Fortress). In tandem with the announcement, the title track of the upcoming EP has been made available for streaming. Check it out below.

The band comments: "We knew from early on that we’re going to record more than an album, as we had plenty of material to work on. When all the songs were finished, it felt natural to compile the album of the heavier epic songs and put the more unusual and catchy tracks on the EP. These three EP songs have contagious hooks and clean vocals. The songs on Kuolleiden Laulu differ from one another considerably, and they present new sides to the band. Lyrically, all three songs are fictional stories based on the 10-year volcanic winter that begun in 535, and has been described by historical scholars as 'the worst time to be alive'."