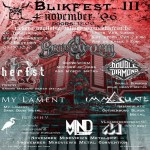 Introduction
Blikfest is one of the first Belgian events that has been supported by Metal Storm (besides Graspop Metal Meeting), and in my opinion, we immediately hit the jackpot with this event. Blikfest is in two words a nice and highly enjoyable festival that is enormously underrated and unknown inside the Belgian metal community. Evidently undeserved! The concept behind Blikfest is at the same time as simple as it is brilliant: the festival bill consists of four promising home metal bands, with each their own sound, genre and character, assisted by an international top-act. Last year, the Blikfest organization managed to book Rotting Christ, this year Graveworm got the honour to headline the festival.

Under the faint shining of the almost full moon, and after some hilarious and pseudo-illegal "incidents" and wanderings in the city of Beveren, we nevertheless arrived unscathed at youth centre Togenblik, right before the first performance. Togenblik is a big, modern, pleasant and popular youth club just outside the residential area. Their event hall is capable and big enough for organizing similar events. Also other Belgian concerts and live radio-recordings are held here. Entrance and beverage prices are very democratic and so not considerably high.

Immaculate
The evening started with the youngest line up of all, Immaculate. Immaculate is a local, rushing band formed in late 2005 who is mainly and highly influenced by bands such as Children Of Bodom and Arch Enemy. Their sound can thus be found somewhere between Extreme Power Metal (as known on Metal Storm) and MeloDeath/Gothenburg Metal. But probably the best way to describe their music is Children Of Bodom without the keyboards. Although they did their very best to kick ass, blasting off one blazing riff after the other one, and despite the pretty good bass player, they didn't succeed to impress very much. Especially the screaming vocals were a bit (to be honest a lot) exaggerated. Their attempts to be evil as hell were also noticeable in the set list: they played songs such as "The Sperm Of The Devil," "Unholy Creature" and "Love vs. Hate"…
As said, the band members are still pretty young (drummer is 19, guitarists are 20 and 23, and the vocalist is 26 years old) and their history is very short (their first real gig on the "Genste Feesten Melodic Day" was only three months ago), so it's more than normal they still have a lot to learn and need to approve their play and sound a bit. Nonetheless, Immaculate seems to already have a relatively big and enthusiastic fan base. Their first album is due for release somewhere in 2007. The band will also be touring as support act for the Belgian Black Metal band Creature next year. Immaculate seems to be a metal band from which we will certainly hear more in the future, but hopefully better and more solid than at Blikfest...

My Lament
As suspected by the band name, My Lament is a Doom Metal band, clearly influenced by My Dying Bride and old-Paradise Lost, but at times also even by Saturnus. And in the last two songs (also the best songs in the set list), I even thought to recognize some Forgotten Tomb influences in the riffs. But just as Immaculate, My Lament didn't succeed at really impressing me. It must be mentioned though the band frequently has to cope with line up changes. Also, they had to contend with some sound difficulties, which were not very conducive for the overall view of the band's performance. Some aspects that were remarkable in a good way were the drummer; his solid, varied and flawless playing was the highest contributor in creating a dark doom atmosphere. Also the funeral-moments were pretty good, although they could have been more "sad" and "desperate." And the low, deep grunts and growls were quite impressive actually, too.
But on the other hand, on the slower, non-growled parts, the vocalist's bad English accent was highly noticeable and even annoying. In my opinion, they were not so terribly bad at all, but they still need to find their turn a bit, maybe by adding some more Mourning Beloveth and Novembers Doom elements in the slower parts.

Herfst
If I have to give you one recommendation of a Belgian metal band of this evening, it's definitely Herfst ("Autumn" in English). These aggressive Melodic Death metallers totally blew us away with their fast, smashing and brutal songs! The band itself calls their sound "Nekromantic Metal," referring to the mix between their sound of raging death metal and the more romantic aimed lyrics, cover and logo art. Herfst is band with a long past but a short history. They already formed in 1999, but only in 2003 the line up got shape. In the same year they recorded their first demo. In the meantime Herfst already played at more than 50 gigs, with bands such as Vital Remains, Tankard and Anorexia Nervosa. And the band is really becoming a phenomenon in the Belgian metal scene.
Herfst was the first band that was really capable in amusing and moving the crowd. They slowly managed to bring atmosphere in the place and were also responsible for creating the first mosh pit of the night. This band has a lot of potential and is very talented: flawless Dark Tranquillity inspired vocals, great melodic guitar solo's and cutting riffs, energetic drumming (as shown in the short but heavy drum solo) and great (left-handed-)bass play.
Herfst also welcomed a new guitar player and a brand-new bassist. And with brand-new I mean the guy joined the band 24 hours earlier. So when they had to play the unexpected encore, they just played the blazing song "Crimson Cathedral," from their first album again. Nobody cared, everybody headbanged and enjoyed the show.


Intermezzo
The place was not that crowded (I estimate somewhere around 150 people, with a lot of girls actually) and absolutely not chock-full, so we could easily take a spot in the front row, as we did.
Another positive thing was the great music between the shows. Some classics of Iced Earth, Slayer, Life Of Agony, My Dying Bride, Paradise Lost and Children Of Bodom were loudly played to keep the crowd amused and to keep the metal spirit and atmosphere high.

Double Diamond
Double Diamond would be the clear answer on the question "what do you get if you put five older, moustached/bearded biker types, with a charismatic front man on a podium, playing solid old-school Heavy Metal"? Double Diamond were the "old hands" of the evening, playing Heavy Metal inspired by (of course) Iron Maiden, Judas Priest, Saxon, Motörhead and 80's Hard Rock. They already opened for Hammerfall (in Belgium and The Netherlands) and Overkill, and played along bands like Primal Fear, Blaze and W.A.S.P.. Their sound was solid and heavy, with, from time to time, neat and energetic solos, and with catchy lyrics just as Heavy Metal is supposed to be. Also the vocals of the totally dressed in black (even with short leather jack, black cap and sunglasses), and slightly drunk front man were pretty powerful. This guy is a real showbeast on stage, entertaining and whipping up the crowd in everything he does and with everything he finds, like swords. Their great, solid performance took about five quarters, and the crowd was definitely crammed and ready for Graveworm.

Graveworm
After patiently waiting a long time Graveworm finally came back to Belgium again, and this time I was there, too. I missed them last year in February, in favour of the Megadeth concert the day before. Graveworm had decided to totally ditch the melodic violins and to play a bit rougher. So their already extreme sound became even more brutal and raw than it used to be. I also found that the melodic keyboards were a bit weak and faint, and got lost in the overall typical Graveworm sound. Regrettable, but not the end of the world.
If we thought the second "Crimson Cathedral" encore was funny and the Double Diamond vocalist was well-dressed, well, then Stefan Fiori surprised us in exceeding both, coming up on stage in his sea-blue "Forza Italia" football shirt and his black P!nk sweatband. But more importantly his vocal performance was also in great shape. Fiori is a master in switching from high shrieks to death growls, and also live he stays a great singer, unlike many other vocalists.
Graveworm played a varied, but even offer of songs from their last four masterpieces, like "Deep Inside" as intro, followed by "I The Machine," "Unhallowed By The Infernal One," "Hateful Design," "Legions Unleashed" (dedicated to his beloved Azzurri), "Never Enough," "(N)Utopia," "A Dreaming Beauty," and "Abhorrence" as encore. And of course, highlight of the evening, on roared request, their Iron Maiden cover of "Fear Of The Dark"! Fiori let us choose between this and the REM cover, but "Losing My Religion" obviously didn't have a chance and was in fact not even an option. The crowd wanted "Fear Of The Dark" and "Fear Of The Dark" we got in a sublime energetic and aggressive version, as said without the violin parts, but still enormously well-tasted by the audience. The crowd in the meantime had gone nuts. Togenblik became an orgy of headbanging, crowdsurfing, chaotic stagediving and the tight and powerful sound of Graveworm. Graveworm kicks ass, enough said.

Conclusion
Blikfest is nice, solid festival, little but powerful, with an agreeable atmosphere in a pleasant venue. Blikfest is also capable of offering promising homeland bands and an international star, and this in a wide range of genres, styles and sound. All this aspects inevitably leading to some great shows, and a fun evening.
See you on Blikfest IV!


Special thanks to the Blikfest organization!