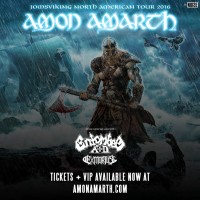 I've only taken two pictures at a concert before, both of Sabaton. One is a black square and the other is blue with some white, swirly shapes. I can't entertain you with visuals, but I do know how to put words next to each other, so I figured I'd give this "concert report" dealie a proper go.

I had been looking forward to this concert for months and months. Not only had I (positively) reviewed the new albums from each band on the bill, a circumstance which I found mildly interesting, but this was to be the first time I got a proper shot at experiencing Amon Amarth in concert. I had seen them twice previously: first at Mayhem Fest 2013, during which I found myself bound to a seat (albeit in an excellent location, front and center), and second at the House of Blues back in 2014, when I procrastinated and got stuck with a mezzanine ticket. Amon Amarth completely burned the house down on both occasions, and I remember those shows very fondly, but finally, for this third voyage, I had secured passage to the general admission area, where I could receive all the beatings and catapulted beverages and accidental hair-pulling I had been waiting for.

Feeling festive, I threw on my red shorts, my red Carcass shirt, and my red flannel shirt and tied up my red hair into my best approximation of Avatar Korra (sometimes you get free drinks if people mistake you for a fire, so I like to augment my naturally flagrant qualities). I showed up shortly after the opening of the doors, and while a gargantuan line remained snaked outside the House of Blues, I had evidently beaten enough of my fellow concertgoers in this race of life to plant myself satisfactorily close to the front, about two or three bodies deep. Within minutes, Exmortus arrived to officially open the evening's festivities.

If Ride Forth had not already forced me to seriously reconsider my initial, lukewarm impression of Exmortus gleaned a couple of years ago, the band's performance certainly would have had me questioning how much I could trust my own tastes. Introducing themselves with a joking and truncated cover of "Bark At The Moon," the Californian quartet quickly shattered the pre-concert still with a massive tidal wave of classically-influenced thrash. Their set was short, and so ought to be my description of it, but in a mere six songs Exmortus ensured that nobody present would leave the venue without remembering exactly who had opened the show. Their volcanic adaptation of Beethoven's Moonlight Sonata (third movement) stands out as one of the most incredible things I've seen at a concert in a long time, with guitarists Conan Gonzalez and David Rivera embracing at one point and shredding behind each other's backs. Now I can say that I have seen people moshing to classical music. More importantly, I can say that I have seen a tall, bearded man in a pink Power Ranger onesie moshing to classical music.

After a delightfully quick turnaround, veteran newcomers Entombed A.D. stormed the stage for a raw barrage of old-school death that contrasted sharply with the epic, technically precise thrash of Exmortus. L-G Petrov seemed to be in the throes of good spirits, sharing his liquor and his laughter alike with the audience members in between songs. New material received a hearty welcome from the steadily-livening crowd, and the band absolutely crushed songs like "Midas In Reverse" and "The Winner Has Lost" from Dead Dawn; still, band and fans alike knew what we had truly gathered there for. Half of Entombed A.D.'s set list consisted of classics pulled from the archives of Entombed B.C.; until the arrival of Amon Amarth, "Left Hand Path" saw the crowd at its most volatile and passionate yet. The Swedes may not have been as flashy or technically impressive as Exmortus, but I got everything I wanted to see: killer material from the new album, some of my favorite OSDM classics, and L-G Petrov haphazardly dribbling beer all over himself.

Entombed A.D. had left the crowd in a good humor, due in no small part to L-G's affable and enthusiastic fulfillment of his role as frontman, but when the black curtain lifted to reveal an impressive stage construction with two massive horns jutting from either side of the drum riser, everyone went mental. The characteristic "dun-dundundun-dun-dundundun-dundundun" of "Pursuit Of Vikings" chugged into being and the battle began. In a glorious 19-song set, Amon Amarth outdid itself as always, with an appropriate toasting of mead before "Raise Your Horns," a staged clash of Viking warriors during "The Way Of Vikings," and such monstrous aural power during "Destroyer Of The Universe" as is only heard of in legends.

My only real disappointment with Amon Amarth's set was that L-G did not come back onstage for the encore "Guardians Of Asgaard," the studio version of which features his guest vocals. I also definitely would have preferred "Back On Northern Shores," now one of my favorite AA songs, to represent Jomsviking in place of "First Kill," "One Against All," or "Raise Your Horns," which I considered some of the weakest tracks on the album. Aside from those two minor points, however, Amon Amarth proved with the greatest of ease why they continue to reign as the melodeath kings after so many years. An Amon Amarth show could never leave an audience disappointed; the band has a fantastic sonic energy that brings to life all the epic historical context with the crushing weight of metal that the chronicled people and events deserve. More importantly, it's nearly impossible to beat such powerfully-crafted songs as "Runes To My Memory," "Death In Fire," and "Twilight Of The Thunder God."

Encore:
17. Raise Your Horns
18. Guardians Of Asgaard
19. Twilight Of The Thunder God

This was a record-breaking show for me. Never have I been crushed by so many crowd-surfers (to which circumstance I append that I have also never had to ferry the same individuals so many times, or come so close to being pulled over the barricade accidentally). I have had drinks spilled on me before (as is tradition), but I have never had whole drinks spilled on me. A few minutes into Amon Amarth's set, when the crush had begun in earnest, someone more or less poured an entire can of beer down my back. Never before have I swallowed so much of my own hair involuntarily. I have also never seen so many people wearing t-shirts of the band they had come out to see. Personally, I consider my love for Amon Amarth implied by the fact that I have spent money to see them and participated in the overall concert experience, leaving my torso free for advertisement of other bands I'm desperate to have everyone else know I listen to. Still, I'll admit that there's something cool about seeing everybody representing the same band at once.

I had entered perfectly sheveled and I exited brutally scathed, having managed to snag both a set list and a guitar pick from Amon Amarth. I must say that, in my experience, Amon Amarth fans tend to make for some of the most passionate and energetic crowds around, and each time I have seen the band, it has proven itself worthy of all that adulation. I have gotten to witness Amon Amarth three times in the last four years, but I already look forward to my next encounter.