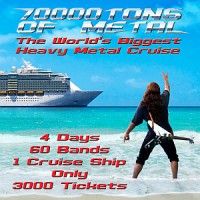 70000 Tons Of Metal, The Original, The World's Biggest Heavy Metal Cruise, has announced the first set of 60 bands to perform on board. The much-anticipated 8th edition sails once again from Fort Lauderdale, FL to Grand Turk, Turks and Caicos Islands and back on February 1-5, 2018.

In short, preparations to attend yet another fun filled outing on board a luxury cruise liner are in full swing. While the phrases 'fun filled' and 'luxury cruise' would normally raise eyebrows in the metal community, when it comes to describing the 70000 Tons Of Metal cruise, it is totally acceptable and accurate. 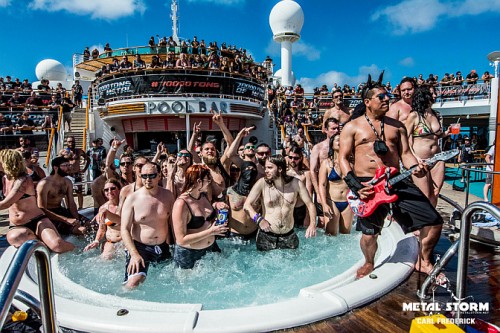 Fun In The Hot Tub While Watching Bands

Ticket prices for the 2018 cruise start at $766.00 per person (plus taxes and fees) and include on board accommodation, access to all shows, meals, room service as well as port and service charges.

According to the organizer, the Public Sales date will be announced in the coming weeks across all their social media pages and on the official 70000 Tons Of Metal website. Festival goers who have attended three or more times (Gold Survivors) already had the opportunity to purchase tickets and those who have sailed just once or twice (Silver Survivors) will be able to purchase tickets starting Monday July 17, 2017.

Don't panic, even though returning customers have first dibs, there are ALWAYS plenty of cruise tickets available. Guests and fans should join the 70K community on Facebook and Twitter and also check out the Official Forum for current information and check if people are looking for cabin mates.

I am not going into details on what the cruise is all about; dear god, if you haven't heard about 70000 Tons Of Metal yet please hand in your 'metal card'.

But I will talk briefly about next year's destination; Cockburn Town on Grand Turk Island, the capital of the Turks and Caicos Islands. 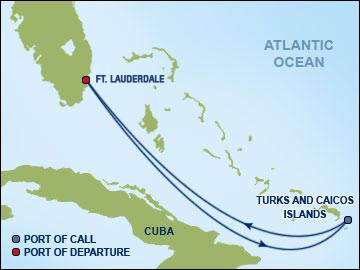 In 2018 the Independence Of The Seas will arrive early in the morning and stay docked all day, leaving plenty of time to choose among the many exciting activities ashore. Swim with stingrays, snorkel or dive the breathtaking coral reefs, go kayaking, take a 4×4 island safari or go on a dune buggie tour. You can also explore the historic island village and the old salinas or shop for duty-free jewelry and local crafts in the colorful cruise center. For more information on what to do, please check out the destination website.

Yes, it is a repeat port of call (we sailed there in 2013), but to be honest, this was my favorite one as of yet. I still remember stepping onto the upper deck of the (then ship) Majesty Of The Seas for my daily morning coffee and cigarette routine and being awestruck by the scenery.


Quote:
Crystal clear water, powdered sand, a short walk from the ship, us the only cruise liner at port and a Jimmy Buffett's Margaritaville restaurant and bar right at the beach made this excursion the best one so far. I am pretty sure the staff at the bar didn't know what hit them when a sea of black T-Shirt wearing and hooligan looking metal heads took command of their establishment. They were really good sports about it and since one of the cruisers actually brought a iPod we all were listening to Slayer and Pantera instead of the usual country/pop/reggae music. The prices for drinks weren't any higher than your usual bar downtown but it was a hell of a lot nicer drinking them while enjoying the scenery in the FREE lounge chairs. SCORE!

Seriously, the destination was just perfect. The ship was so close to the beach, that one could easily swim over and touch it. Before heading back onto the ship, I was fortunate to take one of the most published pictures yet. In essence this image describes what 70000 Tons Of Metal is all about: nice cruise ship, tropical destination, metalhead throwing the horns up high. (and sporting a huge Running Wild patch on the vest is a plus in my book) 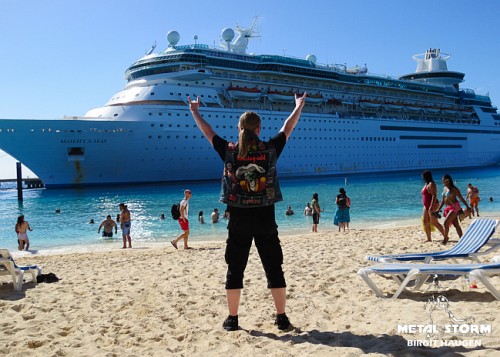 70000 Tons Of Metal Skipper Andy Piller states:
"Every year I book a very diverse line-up trying to cover all sub-genres of Heavy Metal. The only thing that's even more diverse are our Survivors. Last year we welcomed Metalheads from 74 (seventy-four!) different Nations on board, making 70000 Tons Of Metal truly feel like the United Nations of Heavy Metal... at Sea! Just imagine having people from all over the Globe on the same ship. Origin, race, language, religion, lifestyle, all of that does not matter anymore. You can feel the vibe on board that everyone is equal. That's what makes me most proud about 70000 Tons Of Metal."

And he is right. In all those years, I have never seen a more accepting bunch of metalheads than on the cruise. So without further ado, here are 10 reasons why you should sail in 2018:

10. Pre Cruise Parties: while this might not be feasible for some people, the pre cruise festivities have become an integral part of the 70000 Tons Of Metal experience. What started out as a party on the beach the day before sailing has morphed into a cruisers' semi organized multi-day event.

9. Tropical Destinations: unless you live somewhere in the south, it's fricking cold in January/February. Combining a kick ass music festival with the opportunity to get out of the frigid temps and visit an island in the Caribbean should sound most appealing to anybody. And to top it off, some shore excursions will be hosted by bands which gives you the opportunity to spend some extra quality time with your 'hero' while swimming with dolphins for instance.

8. Drinks/Food: you will have the opportunity to eat and drink all day and all night long. The Royal Caribbean Independence Of The Seas offers guests COMPLIMENTORY dining, 22 bars and lounges in addition to 24 hour room service. Check the ship facts on what all is offered. Yes, you have to pay for your drinks (sans water, lemonade, coffee) but to be honest I found the prices very reasonable and comparable to bars downtown.

7. Accommodations: your extra clothes won't be soaked even if it's raining, you will sleep in your own bed, shit in a real toilet and won't get woken up by the burning sun hitting the roof of your hotter then hell tent. That about sums it up.

But seriously, the cabins are nice and you won't have to hike a mile to get to your sleeping quarters.

6. Sets: at a regular gig or festival, each band plays once; not on 70000 Tons Of Metal. Each and every band, regardless of popularity, plays two sets. So just in case you had to miss one set due to whatever reason, you have the chance of seeing them during their second set.

5. Meeting People/Making Friends: it is super easy to meet new people on the boat due to the fact that the atmosphere is just so darn relaxed. For those who have been sailing for a couple of years it's also a nice 'reunion' with their global metal family. As a matter of fact, I have met people from all over the world on 70000 Tons Of Metal and cherish their friendship and make a point of visiting while in their neck of the woods.

4. No Backstage: yap, there isn't a 'special' area just for bandmembers; they roam around freely and most interact with the 'regular folks' all the time. They might sit with you in the dining room, stand next to you during a show or sit at the bar sipping a fufu drink just like you. Should be extra fun in 2018 with Alestorm and Korpiklaani already announced.

But, a lot of artists also bring their spouses or significant others onto the ship and make a vacation out of it. The metalheads on board ARE very courteous when approaching bands outside of the official Meet 'n Greet sessions and I have heard from several bands that this is very much appreciated.

3. All Star Jam/Karaoke: I still remember the first time we had an All Star Jam on 70000 Tons Of Metal, with maybe 25 people watching. Now, the entire multi-level theater on board the ship is packed to the gills; awesome. It's very cool to see all those artists play traditional metal tunes ala Judas Priest and Iron Maiden like they are some kind of cover band. Search the internet for some videos; you won't be disappointed.
Equally awesome is when the random bandmember takes over the mic during the nightly Karaoke. Anthrax's vocalist Joey was not only seen all over the ship in 2017, but he partook in karaoke as well and cruise veteran Fabio Lione is always a big hit among the people watching.


Check out the first 2 minutes of the below video and witness some Karaoke highlights over the years... with Wintersun's Jari and Ensiferum's Markus 'laying it all out"

2. Discovering New Bands: there is always a band or two on the cruise which nobody heard of before. Well, in all fairness, most European festival goers have an upper hand on this due to the fact that they have so many festivals to choose from (small and big) with lesser known bands on the bill as well. I made some great discoveries over the years and hope to make a couple more in 2018.

1. Variety Of Bands: I love the fact that I am able to watch some gnarly death metal band in one venue and a weenie power metal band in the next. My musical taste is all over the map and while thrash will always be my first choice, I can mosh to the likes of Suffocation, turn around and sing along with Blind Guardian before being swept away by the tunes of Epica. The organizers really do a good job of making sure there is something for everyone.

And there you have it, some of the reasons why you really should move heaven and earth to, at least once, make it onto the 70000 Tons Of Metal cruise.

Hopefully I will see ya on board 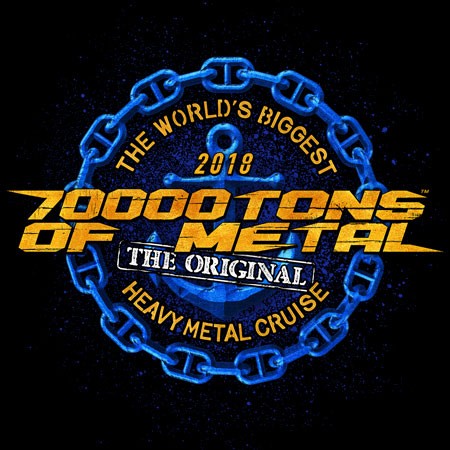