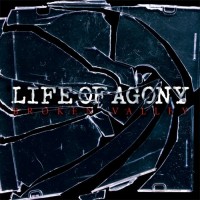 
Broken Valley finds Life Of Agony exactly as they were in the beginning of their career - heavy but viscerally emotional. Stylistically, the music on this album is somewhere in between River Runs Red and Ugly. The band was well known for not holding back on the heavy riffs and often aggressive quality of their music while not sacrificing any of the emotional value of their songs. They went away from this approach on the overly polished Soul Searching Sun but now they are back with a vengeance and without any sacrifice.

The band kick starts the album with a really old-school hardcore metal track called "Love To Let You Down"; however, afterwards they mostly choose to dwell in groove-laden post-grunge alternative metal. This is a great choice since Keith Caputo has improved tremendously since we last heard him on a LOA album. Whereas he was always known more for his ability to communicate the uniquely bare emotional lyrics that the band is known for, right now he is also a simply stunning vocalist, with a powerful, versatile and above all unique voice. He carries the melodies of such songs as "Last Cigarette", "Wicked Ways" and "Strung Out" while the band provides a thundering, heavy accompaniament.

Some surprises also await us on this album - the very heavy "The Calm That Disturbs You" reminds me of Candiria and starts off with a totally killer nu-metallic riff, only to continue with an unusual rhythmic pattern forcefully played by the cult hardcore metal drummer Sal Abruscato. "No One Survives" is a short track in which Keith's vocals are accompanied only by a piano. The band also finishes the album in an interesting way - with a doom metal-like dirge that is "Room 244".

The ultimate standout and highlight of the album is the haunting title track, which sports a lead that most bands playing the more emotional style of metal will be really jealous of. Indeed, LOA are still masters of this kind of metal and an unfakeable emotional bareness can still be felt all the time while listening to this wonderful release.

The careful reader will have noticed that I have not mentioned a single negative thing about this album and this warrants the question - "why not a 10?" Well, the reason is simple. This band already has a 10 (or maybe even two) in their discography and Broken Valley simply doesn't quite live up to the quality of those excellent albums. This is not to say that it is bad, it is merely very hard for any band to top an album like River Runs Red or Ugly. With this said, Life Of Agony's latest release gets very close and I recommend it to long-time fan and newbie alike.

Written on 03.11.2005 by
jupitreas
With Metal Storm since 2002, jupitreas has been subjecting the masses to his reviews for quite a while now. He lives in Warsaw, Poland, where he does his best to avoid prosecution for being so cool.
More reviews by jupitreas ››