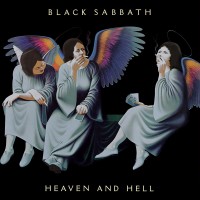 
The year is 1979, Black Sabbath returned from touring in support of Never Say Die!. Tony Iommi was unhappy with Ozzy Osbourne and he decided to fire him from band. Ronnie James Dio left Rainbow in 1979 due to creative differences. Sharon Arden suggested Dio to Iommi and he officially joined the band. They started to work on a new album, which will become some of the most essential ''reading'' for every metalhead on the world.

The album was released in 1980 and since then this album is certainly one of the best Black Sabbath works. Dio brought a completely different musical direction for Tony Iommi, Geezer Butler, and Bill Ward. There's a sense of renewal of an invigorated band with refreshing energy finding new heights of creativity. Although Ronnie's solo work would not be out for a couple of years yet, Heaven And Hell tends to sound more like a Dio creature than the signature sound of Black Sabbath.

The sound of this album I describe (at least for some things) as New Wave Of British Heavy Metal. Just check track's like "Neon Knights" or "Die Young", they are closely related to the early work of Iron Maiden. The beginning of "Neon Knights" reminds me on Iron Maiden's song "Running Free". Producer Martin Birch managed to clean the band's sound up a bit as well, making every instrument perfectly audible without making it sound processed or fake. Important elements of classic Black Sabbath are present: Tony Iommi cracks out some excellent riffs, the drums are excellent and the bass has a pretty big part in carrying the songs along. While a major selling point is the addition of Ronnie James Dio's powerful vocals, the trademark guitar potency of Tony Iommi remains integral the bands sound on the album. Compare this album with any of Tony Iommi's previous work and you'll see a clear change. The riffs are stronger and the solos are more melodic and meaningful.

The addition of Dio wasn't limited to vocals, however, as he also undertook all of Geezer Butler's duties as lyricist. He writes about magic, dragons, and other topics of fantasy and really adds another dimension to an already incredible band. Heaven And Hell is also the official debut of unofficial Black Sabbath keyboardist Geoff Nicholls. He was brought in to replace departing bassist Geezer Butler, who obviously decided to remain with the band. So in the end he went to play keyboards. However, he wrote the prominently awesome bassline in the album's title track. Drummer Bill Ward finally has a big bass drum sound. He finds his wings, showcasing a skill behind the drumkit, though his playing is not as heavy or as frantic as on early albums. "Lady Evil" and "Wishing Well" features some of Geezer Butler's best bass work, especially "Lady Evil" where his bass lines are main element. The album cover was great, three angels smoking cigarettes and playing cards. That could be a picture in a museum.

Heaven And Hell is not as heavy as the early Black Sabbath records, but it flourishes nonetheless because of the flawless musicianship you'd expect from Black Sabbath: the powerful vocals and intriguing fantasy lyrics you'd come to expect from Dio, and the excellent songwriting that, prior to this record's release, I don't think anyone was quite expecting from the unlikely pairing.