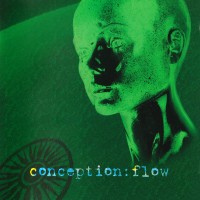 
The fourth and final album Flow from the progressive/power metal band Conception. Even though it's the last album from Conception until they broke up they left a nice comfortable album to rock out to. Flow contains more melodic and clear vocals from lead singer Roy Khan, along with nice guitar rifts and drum beats. The album feel more electro and different from the any other Conception album. You might think that it's a bad choice for the band to change up their style a bit but I can say that this album will not disappoint any Conception fan because they still make sure to put their mind and effort into their albums.

The music is more atmospheric and outgoing then any other Conception album but still has that power and metal we like to hear in their music. Roy Khan's voice in this album goes from clear/angelic to daring and mood swinging in some of the songs. The voice of Roy is probably one of the best I've heard in metal.

Production on this album is maybe the best of all Conception albums and that includes performance as well. This in perhaps the best Conception album because more of the songs in this album have that energy and spirit that keeps me rocking out. The beat and the spirit in the songs are keys into the performance of the band. Songs like "Gethsemane" and "Cardinal Sin" have a nice electro beat into them that really sounds like the 90s. "Would It Be The Same" is probably the best song here because it has a rocking drum beat in it and the lyrics are some of the best on this album. The best feature on this album is the magnificent lyrics that have great impact on all of the songs; it's just amazing.

It's a disappointment the band split but I can say that Conception left a classic album behind In which I highly recommend to any fan of power/progressive metal and to every fan of Conception.