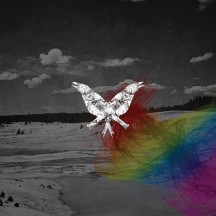 
Bands with a wailing guitar, an all-encompassing bass, and a dose of psychedelic rock are really making me happy these days. It's a moment in time… after the explosion of great music yet before the lesser musicians jump on the bandwagon and cheapen it. Enjoy this moment while it lasts. I know I am.

I could see Maudlin's A Sign Of Time being called "progressive post metal," "post-sludge," or, "more of that awesome bluesy psychedelic thing that's happening right now." Whatever. It's dark and captivating. Strangely enough, I hear hints of Americana, which is weird since these guys are Belgian. But they have enough of that southern "Savannah sludge" vibe that I was plenty fooled. And happily so.

The guitars howl through a dense, raw atmosphere and really set the stage for the album. That thick bass ties everything together and makes A Sign Of Time one of the most cohesive records in this new style. Maudlin incorporates several vocal styles, which is a big treat here. Sometimes the post metal-like yells add to the thick atmosphere, other times the vocalists together create interesting and perfectly strange harmonies. Then there's "Ride The Second Wave," which channels some sweet mid-90 gothic rock, a la Type O Negative while the vocals transmit the lyrics in a visceral cry.

I would be remiss if I didn't mention the creepy opening track. Let's say you're walking through a playground at night. It's early fall; there is a chill on the air and the wind rustles some leaves and causes the chains of an old swing to creak as it sways. What is the last sound you'd want to hear at this moment? That's the intro. No giveaways. Just go listen.

Before we finish, I must mention the excellent "Chasing Shades," which opens with a bare guitar duo. After the thick mood of the album thus far, this second-to-last track wakes you up for the big finish. It's moments like this that pepper the postdoomsludgerock with personality and compel you to spin the record again.

Like a passing reflection, each contributing musical style shows itself just long enough for you to glance in its direction, but it's already gone; absorbed. That's atmosphere, friends, and Maudlin could teach a class on it.

Listen at Bandcamp, then buy on CD or beautiful vinyl.

Written on 07.03.2013 by
Susan
Susan appreciates quality metal regardless of sub-genre. Metal Storm Staff since 2006.