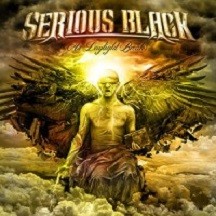 
Super groups are curious creatures. Despite often having superb pedigrees, in many cases they fail to achieve that magical chemistry which might even turn 4 average musicians into something special. In fact too often it's some sort of generic mash up of the members' other project. And with members of Blind Guardian, Helloween and Tad Morose in the band, Serious Black's pedigree is quite illustrious. So the question arises: does Serious Black rise above its origins to create heavy metal that will stand on its own merit?

The answer is yes (to some degree).

Serious Black is basically typical German style heavy/power metal, albeit a little bit more on the melodic side and with a few more hard rock/AOR leanings than your average Helloween or Gamma Ray or Rage or whatever other German power metal band one might fancy, except perhaps Edguy's latest efforts.

There are some really enjoyable songs here even if they're extremely formulaic. It's more consistent in terms of song writing than many established bands' recent efforts even though the older bands' standout songs are still better. On the other hand Serious Black are still far better than the myriad of power/heavy metal bands in terms of getting the most out of generic song structures and equally generic melodies. In some ways Serious Black have written the ultimate examples of power metal archetypes. This is the benchmark for stereotypical power metal.

The other problem with this release is one that is endemic in European power/heavy metal. That problem is overproduction which removes any rawness out of the music and slathers it in a plastic-sounding sheen. And Urban Breed's vocals have somehow become subsumed into the generic modern power metal vocal styles without any of the emotion he displayed on Tad Morose's brilliant Modus Vivendi.

For the time being As Daylight Breaks is quite a decent debut that power metal aficionados will find quite enjoyable. But they need to find their own sound or they will get stale very quickly. And this is not impossible in power metal. After all the band members come from some of the most unique or pioneering bands in the genre. Hopefully the second album will see the band finding their own sound.