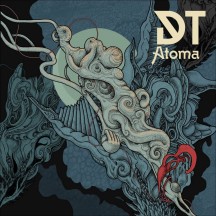 Three years ago we had Construct, a so-so album - a mostly failed experiment at redefining themselves. Sure, these last few years haven't been easy on DT as far as line-up was concerned, particularly 2016 with the departure of founding member Martin Henriksson.

Yet this was probably the proverbial kick in the guts the Dark Tranquillity guys needed, as we immediately discover with opener "Encircled". This fantastic song - easily the best of the album, sorry to spoils the beans already - feature incisive guitar lines and great hooks throughout.

Don't fret, however, there are plenty of goodies afterwards. Title track "Atoma" could easily become a future live favourite with its "Therein" mood, and "Forward Momentum"'s mellower and slower approach is magnified by the great melodic lines. (As a side note, I must say I really like the song's videoclip - they're a band past their forties now, and it shows in a good way; they matured and aged like us, and the questions they raise could be for each and everyone of us).
And it goes on. Each song has its twists and hooks, whether riff going in an unexpected direction (fantastic "Neutrality"), tempo shifts, value-adding keyboards effects ("Atoma"'s intro, "Force Of Hand"), inspired solos, you name it. All these variations, that make you raise your eyes / ears / whatev' in approving surprise, are the definitive signature of Atoma.

Sure, the song structures are quite classical for DT - a tried and true formula - yet the thousand quirks on the riffs, solos and effects make it for a refreshing and interesting listen. There's indeed a certain playfulness (or an urge to evolve or die) in them that makes them all the more tasty. Speaking of songwriting, I must admit being a bit worried beforehand; I mean, the catchiest songs DT ever were the brainchilds of the Jivarp / Henriksson duo. With one of them gone... Well, Anders Jivarp did prove he owed 'nothing to no one', and wrote or co-wrote more than half of the album, including the two bonus tracks - fantastic mellow, electronic heavy rock songs with quite a Depeche Mode feel.
As for Mikael Stanne, he's still as much the great vocalist we know and love - whether for clean or harsh vocals. The lyrics, while as always never too specific, certainly show the conflicting sense of disarray, anger and helplessness we felt after the terrorist attacks - remember Dark Tranquillity did play once in the Bataclan, in 2011...

Now, on the shadier side of things... The simplistic all-stop endings ("Atoma", "Forward Momentum", etc) really bothered me. Anything would have been better, really. Then there's the melodic verse of "Our Proof Of Life" which is almost a carbon copy of "State Of Trust" (out of Construct). That's the first time, I think, that Dark Tranquillity outright repeat themselves. And, let's face it, Atoma's second half is a bit less impressive - something not unknown with DT, as Damage Done or We Are The Void can attest. Sure, "Clearing Skies" does make up for it, but still.

On a more personal note, I admit I'm a bit disappointed by the lack of a follow-up to "Inside The Particle Storm" or "Endtime Hearts" - same with "Caves And Embers" which just can't compare with album closers like "None Becoming", "Ex Nihilo" or "Emptier Still".

I realize more or less all my criticism is nitpicking based on being a long-time fan, and having a lot of material to compare to... And good or bad, I certainly couldn't cover everything - or that would make for a very boring read - so let's conclude by saying that Atoma appears as the continuation of Construct, but in a successful, bold step forward manner, and with an homogeneity not found since Character. For the un-initiated that would be guitar-driven Gothenburg melodeath with great keyboards spicing it up.
Truth is, this album is excellent, their best since 2005 indeed, but maybe slightly less accessible and a bit more demanding than Fiction, for example. It's easily the best melodeath album of the year - and of recent years, all things considered - and an excellent entry point for those of you who never sampled the Swedes' fantastic music!

Written on 17.11.2016 by
Darkside Momo
Once your regular Hellfest reporter, now retired. I (strangely enough) listen to a lot of metal. And enjoy good beers, comics, novels and role-playing games.
More reviews by Darkside Momo ››