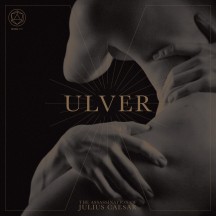 
If Ulver were one of the X Men characters, they'd easily be Mystique. Ever changing, always in a state of flux, and able to morph their identity with incredible ease. When we last left off, Ulver dropped that "Zodiac Album" with the unpronounceable title. Highly psychedelic, jammy, and meditative, if you know the band and what they're all about by now, you know there's only one thing you can ever expect next out of them: the unexpected.

And indeed, considering their previous effort, for Ulver The Assassination Of Julius Caesar is a pretty big curveball. Musically this album is about as far removed from the Zodiac Album as could possibly be. Instead of that sound, here listeners are treated to a bright, synth-driven pop type landscape, held up, unquestionably, by the absolutely amazing vocals of Kristoffer Rygg. Here you get what is no doubt one of Ulver's best Rygg-centric albums to date, and I don't mean "Rygg centric" like Shadows Of The Sun or Wars Of The Roses, albums where his vocal presence was there, but in a very hushed, whisper-like delivery. Here he is the commander of this ship, offering up a soaring delivery and epic lyrics that do indeed revolve around themes of Rome, the Caesars, and relating subjects. My, oh my, just give "Nemoralia" or "Southern Gothic" a listen and let it melt your heart. This is one of the very few guys out there I'd legitimately go gay for because of his voice.

An increased presence for Rygg's vocals inevitably means a lower presence for instrumentation, or, to put it better, that the instrumentation here isn't really as crazy and all over the place as it was on their previous effort. This may come as a downer for some who really enjoyed that Zodiac Album, but it's testament to the fact that Ulver have a seemingly infinite number of ways of changing their style and still making it work. The music here is often pretty simplistic and reminiscent of basic pop song structures, but somehow it still carries a distinct "Ulver flair" in the fact that it's still very hypnotizing, relaxing, and spiritually uplifting. This is the real joy of The Assassination, this feeling that Ulver did go for a more conventionalized musical style here, but that they still totally owned it and made it their own. And goddamn, does it work oh so deliciously. Just give "So Falls The World" a listen if you want to see what I mean.

On The Assassination Of Julius Caesar, it's really Rygg who carries the weight of the music with his vocals and drives everything to its destination with his forward momentum. But that's OK, it's perfectly fine, because with this approach, one really can't complain and say that it means Ulver are a band that can't make good music without Rygg's powerful vocals at the helm, as this simply isn't the case. All this album is is an alteration for Ulver, what the band are all about really, one that goes from the extended, jammy instrumentation they've recently been playing with into a more restrained, poppy instrumentation dominated by the beautiful pipes of Kristoffer Rygg. Is it better? Is it worse? You decide. All I know is that as a total effin' sucker for both synthwave and Rygg's vocals, this is hands down my favorite Ulver release in years, and one that could easily become my favorite period with a few more listens. Yes, it's seriously that good.

The terrified cry of "Et tu, Brute?" has never sounded this beautiful.

Written on 18.04.2017 by
Apothecary
Comforting the disturbed and disturbing the comfortable since 2013.
More reviews by Apothecary ››