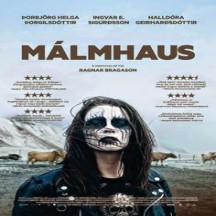 
Metalhead is the name of an Icelandic film written and directed by Ragnar Bragason, released in 2013. Petur Thor Benediktsson composed the music.

Summary: The movie tells the story of a rural family making a living through farming and animal husbandry. Hera, the daughter, has a brother who loves metal music. One day during Hera's childhood, when her brother is plowing the fields, he is suddenly thrown off the tractor and goes under the blades, losing his life. Hera, who sees this happen, suffers from great despair; leaving the church in the middle of her brother's funeral, she returns to her brother's room and decides to take up his mantle and become a metalhead. She receives a variety of feedback from her community.

Review: First of all, I would like to say that being based on the subject and narrative of the life of an adolescent undoubtedly separates this film from other films made in this field, and it is an interesting film. Films made in this area, mainly motivated by the attractiveness of the title, want to abandon the concept of black metal, which is dark and full of unpardonable people. In this mindset, a little girl in a village is morally and spiritually clean and simple; the most important thing about this movie is the type of character chosen to play the role of protagonist. Thora Bjorg Helga breaks the well-trodden, tired-out, always-used tradition that depicts such unusual behavior being manifested by a boy - she is a character who finally shows that metal music is not a male-dominated genre of music. Moreover, girls can even have a leading role in building and conducting a metal band in order to be simply happy.

The film was made entirely in Icelandic and in Iceland's pristine nature, which makes the commercial aspects less suitable for selling tickets; in fact, you do not necessarily have to speak English or die! This is the noncommerciality of the film and its originality; it is less of a propaganda piece that turns the film into an acceptable film for the affluent community. Much of the film's production and release did not last long. The music focuses on the music of the '80s, and all of the tracks featured represent bands of classic heavy metal music. Although the story of the film is set in the 1980s (the peak of heavy metal) and the 1990s (the peak of the black metal era in Scandinavia), and the main character is geared towards these kinds of music, classic heavy metal is a major contributor; Judas Priest's "Victim Of Changes," which immediately hits the film's insecurity in Hera's emotions, was a great choice.

In this film, metal music is actually a savior and has been shown in a way aspiring to fight against troubles and bitterness. While Hera experiences a lot of difficulties in her life, with metal music, all these hardships seem more tolerable. But the reaction from the small village community is one of the most beautiful things that we can experience. Feeling brittle, different, and isolated, followed by an ounce of sheltering metal music - metalheads have no flagship, but are free and want this freedom to belong to everyone, and this film showed the emotions and sensitivity of a metalhead.

It seems to me that the personality and charisma of the present reveal not just a good story, but an admirable effort to show the character of a metal devotee: the character we all claim to be.
Written by R.Baldur | 22.08.2017