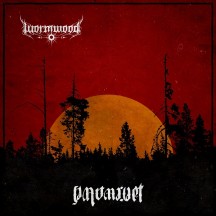 
If you have read my review of Ghostlands - Wounds From A Bleeding Earth, you can imagine how quick I was to grab Nattarvet from the stack of promos waiting to be reviewed. Wormwood's second full-length offering is different from their debut that topped my 2017 list of favourites and also won two categories in that year's Metal Storm Awards by a landslide, yet you can easily still tell it is the same band behind the heaps of inspiration and songwriting brilliance of both records.

Talking about differences, the first and obvious observation is the runtime of the songs; the album clocks in at just under 54 minutes, yet there are only seven tracks in it. The Swedish melodic/atmospheric black metallers have chosen to develop their ideas further and to go for a more epic and gloomy style of songwriting, which makes Nattarvet less catchy than Ghostlands upon first listen. However, the more exposure you have to the album the more its layers are being unfolded and the more addictive it becomes. The melodies that hooked the listener in Ghostlands are still present, but they have taken another form.

In Nattarvet, Wormwood explore the melancholic and forlorn, they dive deep into stories of people forgotten and isolated, and narrate tales of horror and death. While Ghostlands was not exactly a happy album per se, the light would still shine through the leaves of the trees it was engulfed in. Nattarvet, on the other hand, can be best described as Swedish taiga turned into a vast and frostbitten burial ground for those that were struck by deadly winter. The music fits the personal character of the lyrics by being emotional to the point of heartbreak; even the folksy parts, that in Ghostlands sounded "as merry as lambs prancing around in meadows" (©2017 Marcel Hubregtse), now use the violin as an extra instrument for frozen misery to unravel.

I can imagine that many, including myself, wished for Wormwood to release a carbon copy of Ghostlands. However, what differentiates truly outstanding bands from those that no one will remember in ten or so years from now is the will to dare and to evolve and this is exactly what Wormwood have done here. They chose to make the "difficult sophomore album" even more difficult to digest for the listener, but instead of a slump they came up with a triumph that makes you want to get lost in a Scandinavian forest wearing your headphones, far away from everyone.

It is pointless and unfair to single out particular songs. Nattarvet is a stellar piece of music that should only be experienced as a whole.