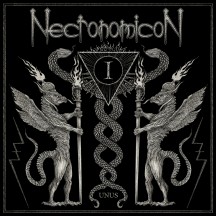 
Playing to your strengths may not fulfill your underlying experimental desires, but it certainly makes for high quality entertainment.

Necronomicon (CAN) is the result of what happens when you combine backing choirs, dramatic keyboard effects, infectious groove, and sweeping riffs with a polished, yet old school, death metal sound. And that exact rigid formula has been on repeat now for nearly 30 years, with slight variation only coming in the form of differing production values and techniques. That level of consistency alongside demanding, impressive songwriting typically nets you a far wider audience, but in the case of these French Canadians, their fame has unfortunately been left behind to watch the Nile's and Behemoth's of the world dominate the headlines. Surely there's room for one more heavyweight on the bill, even one that seems to struggle pulling in high ratings due to its own contentment to linger behind the scenes.

Speaking of left behind, one of the immediate standout features of this album is its mixing. UNUS is sure to follow standard military heroism of retrieving fallen soldiers in battle, gathering the dead and wounded even if it means failing to complete the mission. This is a very personal experience, not some big picture sacrifice. Between the rapid-paced foreground drums kicking your skull in and orchestral arrangements bombarding your ear canal, this comes across as an extremely immersive album -- despite the death metal descriptor. Not like your typical wall of sound, there are key moments showcasing each member's unique instrumental talents while the rest of the band works in cohesive ant-like efficiency to progress the overall barrage of thick licks, pounding drums, and soaring melodies. All of this helps buoy the independently notable vocal aspect of this album, which has been a mainstay throughout Necronomicon (CAN)'s career. Rob "The Witch" Tremblay boasts some delectably deep and powerful growls with excellent enunciation, and his incorporation of backing choirs is always done so seamlessly to build upon the band's subtly occult sound.

Now with all this technobabble about production values out of the way, it's about time to explore the music. As previously mentioned, this is a band -- while not exactly world renowned -- that brings their A game in the songwriting department. The ease of transitions from extreme assault, to catchy old school grooves and guitar solos, to doomy orchestral passages, songs are made to stand apart without ever straying from standard UNUS protocol. Repeat listens make for enjoyable newfound elements each time, yet it's accessible and straightforward enough to leave behind more than a few of its majestic symphony-aided riffs in your head days later. It's a satisfying album with its only glaring flaw being that it doesn't offer much compared to what's already been done over the decades, but that doesn't take away how enjoyable it is.