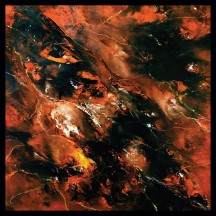 
Man did this album fool me that it was just a raw riff fest. Turns out it's even better than that.

I wasn't familiar with Jordablod before I heard this album recommended. My first listen to it was more of a "put it in the background while doing work" and I liked it well enough but it didn't grab me. For some reason I decided to give it another go. Now I finally realized that the more attention I pay to it, the better it gets. This was a deceptively complex album, not complex in the technical way, but it surely grasps beyond just the second wave punchy riffs that it delivers on the surface. I made sure to give their other album, Upon My Cremation Pyre a go too, and while I cannot really decide which of those I prefer, it's clear that I did Jordablod a disservice by dismissing them the first time around.

If there is one album this reminds me of, it is Funereal Presence's Achatius, but they're very different albums. The Cabinet Of Numinous Song doesn't feel as sprawling and it doesn't have a cowbell, but it has the same knack for having an original approach on second wave black metal, and a fair deal of third wave too. A lot the album isn't as focused on riffs as I initially though, with plenty of tender acoustic moments that feel almost surf or psych rock inspired, a lot of atmosphere and intricate songwriting too. Of course, there's riffs galore that are coupled with the raspy somewhat one-dimensional-but-never-too-monotone vocals. Indeed the more I listen to it the more it feels more personal and emotional and awe-inspiring.

I'm not sure exactly why the album is called The Cabinet Of Numinous Song instead of The Cabinet Of Numinous Songs, but they got the "numinous" part right. I did compare it to Funereal Presence, but perhaps a better comparison would be the one-man-band's other band, Negative Plane. Jordablod sounds strangely psychedelic and chaotic, like they carved out their own lane in black metal. When at one point the howls and the riffs feel traditional, they change gears and plug in some twisted melodies and psychedelia. It's maddening and absolutely captivating.

Written on 29.02.2020 by
RaduP
Doesn't matter that much to me if you agree with me, as long as you checked the album out.
More reviews by RaduP ››