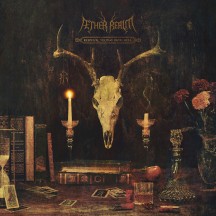 
While on his way down to Georgia, the Devil was waylaid in North Carolina. He was found dead three days later, clutching a banjo and the shreds of an Æther Realm t-shirt.

Æther Realm's studio material has never made much of an impression on me up to this point - serviceable melodeath with some crossover into folk and a good sense of humor to lighten the load, but nothing I'd come back to after sampling. Redneck Vikings From Hell changes that for me, and it isn't just the unusual accumulation of elements in the name. This album finds Æther Realm following a similar course of evolution to what Equilibrium attempted with their last couple of albums, introducing some less-than-standard instrumental components and throwing a very commercial spin on the melodeath that remains. Those of you who cringed reflexively just now should know that Æther Realm's pop-addled mischief has been carried off with much greater success, in part due to the fact that Æther Realm was silly to begin with (although I may not be a reliable source, as I did also enjoy those last two Equilibrium albums). It is also important to note, however, that most of what happens on Redneck Vikings From Hell simply exacerbates trends that were already apparent on previous albums.

An experiment like this naturally must open on a high note, and so this album does with a title track that delivers the redneck unto the pantheon of Norse deities waiting to be immortalized by black metal albums for generations to come. Taake have already given us a taste of black metal banjo (and Children Of Bodom messed around with one in their cover of Creedence Clearwater Revival's "Lookin' Out My Back Door"), but heavy metal has an astonishing (and, frankly, embarrassing) lack of banjo performed by people who are actually licensed to play it, and these North Carolinians are here to change that. It's not merely the ability to play an instrument but the ability to sweep in some convincing country on the side that makes this song great; this actually counts for most of the "folk" on this album, as Æther Realm have nudged increasingly towards the melodeath side of that classic blend, and beyond that into extreme power with all the wanton melody being slung about.

While that song unfortunately marks the final appearance of the banjo, the adventure does not end there. Taking notes from "Death" on Tarot, singles "Goodbye" and "Guardian" and album track "Cycle" combine the sultry baritone hooks of a lace-wearing powder puff with the chilly melodeath crunch of a Finnish lace-wearing powder puff; while the strong admiration for/cribbing of Finland's characteristic folky melodeath sound has always been part of the game for Æther Realm, these goth-pop tracks sell the connection all the more strongly with their sensual melancholy. And it's not especially Finnish, but I'd swear that "TMHC" has something resembling a growled rap verse in there…

Few of these songs remain for their duration what they appear to be at the outset; hardcore brodown "Slave To The Riff" features a little bit of an Opethian slam, and tasteful acoustic guitar work worms its way into several tracks. The epic finisher, "Craft And The Creator," makes frequent shifts in tempo and tone, ultimately landing somewhere a little spacey and a little mathy. Even at its most "standard," Redneck Vikings From Hell is catchy and humorous enough to invoke the fine balance employed by bands like Alestorm and Nekrogoblikon; this includes standouts "She's Back," which furthers the band's Swampwitch mythology, and "Hunger," which is about eating.

Redneck Vikings From Hell is the most accessible collection of songs that Æther Realm has yet put forth, which will likely alienate some fans who dug the heavier elements but will come as good news to fans who wanted a heavier older brother to Gloryhammer and Twilight Force. This album's most experimental tracks were the ones most enjoyable to me, and certainly the ones that will make the band stand out the most - I, for one, hope that they find new and better ways to incorporate the banjo. Æther Realm have discovered a taste for an uncommon blend of sounds here, and they could easily go for the gold and craft another album that fully embraces this goth-country-synth-death-power metal blend to become a truly unique force. Even if they don't, however, Redneck Vikings From Hell has made me wonder whether I wasn't paying close enough attention to those earlier releases.