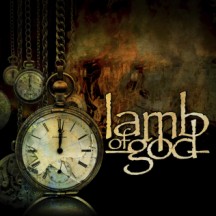 
I generally feel a measure of skepticism when a band releases a self-titled album a long way into their career, and Lamb Of God doesn't do a lot to change that.

I feel like there's three leading reasons one would choose to name a non-debut record after themselves. The first would be if the band had undergone a major alteration in line-up and/or sound, and wanted to use the self-titled album to announce the new and improved version of the group; for an example of this, see Firewind by Firewind, which a recent review on the website considered fitting for a band with a new vocalist at the helm. On that front, Lamb Of God is the first time that Lamb Of God have released a record without their starting line-up, with Chris Adler replaced on drums by Art Cruz (ex-Winds Of Plague and currently in fellow groove metal band Prong); however, despite this change, one would be hard-pressed to argue that it's had a meaningful impact on the band's sound.

As such, that leaves two other options. The first is that Lamb Of God is a crowning achievement of the band, a singular testament to their accomplishments that serves as the definitive statement on their career to date; the latter is that Lamb Of God reflects a band in a creative rut that prevents them even coming up with a suitable album title. I'm not sure either of these is really accurate, but if I had to argue one, I would certainly lean more towards the latter.

Anyone who has heard Lamb Of God's output since Ashes Of The Wake will find almost no surprises on Lamb Of God. The groove thrash sound, alternating between mid-tempo grooves and bursts of faster thrashier material, is fully on display throughout, and as always the riffs alternate between percussive low-end rhythm-oriented grooves and more intricate parts - for a classic example, just listen to post-intro opening riff in "Memento Mori" for the latter and the subsequent verse riff for the former. The regular bass drum patterns beneath this opening riff only cement the feeling of déjà vu, with Cruz seamlessly fitting into the band's classic sound.

You get the odd unique moment here and there, primarily in the way of guest vocalists, with Hatebreed's Jamey Jasta and Testament's Chuck Billy making moderately interesting cameos on "Poison Dream" and "Routes" respectively, but also with some clean vocals (presumably from Blythe as I haven't seen anyone else credited) on "Bloodshot Eyes", which are perhaps surprisingly well pulled off. However, outside of those moments (which also occurred on previous record VII: Sturm Und Drang), Lamb Of God could be considered the quintessential Lamb Of God album, in so much as it feels like a continuation (or more harshly, a retread) of their work since Ashes. "Memento Mori" is an effective enough opener, but I get thrown back to "Still Echoes" from VII: Sturm Und Drang in its chorus. Track two, "Stalemate", begins with a slack, muted version of the main riff that follows, very similar to "Ghost Walking" on Resolution. The ominous, slower chug that opens "Reality Bath" with Blythe dryly narrating on top echoes a similar passage at the beginning of "512". All of this put together means that both the overall sound and the fine details on Lamb Of God are extremely similar to the band's past work.

If novelty is off the table, can the band at least bring the memorable songs to make Lamb Of God a compelling listen? Ashes Of The Wake aside, I've always found Lamb Of God to be more of a 'songs band' rather than an 'album band' (although I did admittedly spin Wrath quite a bit when I first discovered the group); a greatest hits compilation of the best songs from Sacrament through to VII would be a monster of a release, but as separate packages, the quality songs on each record are offset to varying degrees by forgettable album tracks, with the bloated Resolution being the worst offender, and its successor VII conversely being most heavily concentrated with bangers. However, I'm nearly into double digits in terms of playthroughs of Lamb Of God, and I'm struggling to think of even one track that has really gripped me and made me eagerly anticipate hearing it again. Given the overriding similarities in style between songs, the killer Lamb Of God tracks rely on memorable hooks, whether it's a lead guitar motif ("Walk With Me In Hell", "Laid To Rest"), sick groove ("Redneck", "Omerta"), big chorus ("Set To Fail") or something else. I'm struggling to think of any such moment on Lamb Of God, and with each further listen in which nothing stands out, the absence of anything to elevate these songs above being rehashes of previous tracks has if anything started to bore me.

Okay, there's one part I do rather enjoy. Closing track "On The Hook", generally one of the most exciting songs here with its full-pelt thrash opening (even entering blast beat territory at times), has quite a stirring outro, thanks to some neat lead guitar work. However, whilst having the ending of an album be the peak moment isn't inherently bad, when only the final 2 minutes out of a 44-minute listen really grab my attention, it makes for quite a slog with limited payoff. As for the rest of the record, there's nothing specifically bad about it; in isolation, the groove/thrash riffs and snarly vocals that make Lamb Of God so appealing are perfectly enjoyable, with the band technically on top form across the board. It's just that these songs don't do anything beyond that to make them worth listening to above those that have come before.

A new drummer and some new guest vocalists haven't caused a revolution in Lamb Of God; their self-titled album is everything you would expect from the band given their history. From that view, it might actually be a fitting title; however, it's far from being the most compelling incarnation of their sound, so in terms of being a definitive summation of the group's legacy, it sadly falls short.

Written on 20.06.2020 by
musclassia
Hey chief let's talk why not
More reviews by musclassia ››