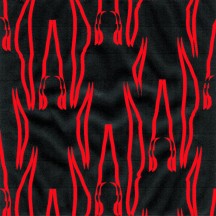 
It was only a matter of time before Deafkids collaborated with at least one Cavalera.

It isn't Max Cavalera as much as I wish he would eventually make his way on a Deafkids record. Instead we get the second best Cavalera in form of his brother, Igor. He is mostly known for having been the drummer of Sepultura, and later of Cavalera Conspiracy, but something told me that he is a bit more versatile than just being a metal drummer when I found out that he drummed on the latest Ladytron record. Already being familiar with Deafkids and knowing that they would collaborate with a band called Petbrick, I had a similar moment finding out that Igor Cavalera was a member of that band as well. Now I am not yet afraid that he will start popping up doing drums in a bunch of projects I come across the same way Mike Portnoy does, but it was still a bit surprising. Regardless, Petbrick is a duo of him and Wayne Adams, who seems to be the one member most involved in noise rock projects, none of which I'm familiar with yet. Deafkids, you should know them by now.

It seems that this collaboration actually started as a collaborative set at Roadburn Festival, adding another set to the ever-increasing list of "regret missing" ones, though at the time I had no idea who either Deafkids or Petbrick were. Not only is Roadburn a hotbed for collaborations that eventually turn into studio material (be on the lookout for Thou & Emma Ruth Rundle later this autumn), but this particular one clearly has the feel of something that started out as a live performance. Igor having met Deafkids in Brazil and having felt such a strong chemistry in the live performance, it's no wonder that most of the album was finished in just three days. Also listening to the latest albums by both bands, it's no wonder their styles go hand in hand, since they're both an industrial and noisy take on rock music, with just a bit more psychedelia on Deafkids' side. And there's enough punk and electronica seeping in on both sides. It's basically different nuances of the same sound.

With both of the bands' sounds being this close, one has to wonder what could be so interesting about a collaboration between the two. And granted, a lot more interesting matchups have been made just purely on how radical the sound clash is, but here, though some nuances do clash quite nicely, it works on the benefit of the sound becoming more immense purely on the expanding lineup and the intense chemistry between all five members. Though the jammy and improvisational live feeling is still there, Deafbricks just can't properly contain to just how visceral a live performance of this would probably feel like, but they do a pretty good job at capturing just enough of it as it can fit on record. Brazilian folk percussion, a Discharge cover that ends with a sample of the original band talking shit about this version and claiming that Metallica did a better version, pulsating electronica, enough reverb to kill a war elephant, and most importantly a lot of psychedelic punk attitude.

And though this will only make me more mad for missing their performance, it's another testament as to why we should pay more attention to Deafkids now that their collaborative spirit is growing, and to also be on the lookout for the unexpected places where Igor's drumming will show up. I should also probably check whatever Wayne Adams has been doing til now.

Written on 04.09.2020 by
RaduP
Doesn't matter that much to me if you agree with me, as long as you checked the album out.
More reviews by RaduP ››