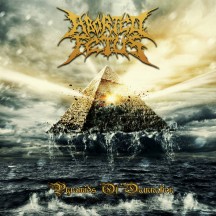 
Some bands elevate the genre in which they find themselves aligned. Others merely produce as if commanded to do so.

Aborted Fetus aren't know for being a top-tier band in the brutal death metal scene, but they can at least be relied upon for their consistency. Aside from their varying quality in production, the songwriting quality remains true throughout their discography. And while Pyramids of Damnation may not deviate from the expected standard, the lyrical approach at least offers something different compared to previous releases. Not that ancient Egyptian themes are inherently unique, but it goes to show these Russians aren't simply mailing it in album after album of same-sounding material, and that maybe some thought and effort are incorporated into the ingredients of the band's recipes. That said, you would be forgiven had you wrote them off as some inexplicable parasite feasting on the corpse of contemporary brutal death metal.

Absolutely nothing about this album deserves special appraisal, being that its entirety is comprised primarily of generic, derivative chunky chugging down-tuned riffs. The slightly technical drumming almost distracts you from the formulaic song structures, plodding along aimlessly at the same pace over the course of its hour-long sojourn. Moments of intricacy and melodic tendencies creep in to break up the general monotony, but the overwhelming tendency of each song is to cater to the lowest common denominator of listeners, leaving those optimistic enough to believe in something more from this hoping for some semblance of variation or change. "Tomb of Damnation" and "The Ancient Ritual of Death" even go so far as to lure you in with their thematically appropriate instrumentation, only to cave immediately after in the face of the album's demanding motif of extreme simplicity. And the brevity-addled guitar solos further expose the band's underlying inability to conceptualize just what draws one in to their world of death and horror.

Through relentless pounding, grinding, grating, and growling, there are aspects of this album that do their best to stand out among the otherwise straightforward barbarism, though they shine so infrequently that its duration feels more cumbersome than likely intended. The audience is burdened with the onus of wading through so much bland, inoffensive material that betrays the very nature of this music, it begs the question of the album's purpose. Inspiration or innovation clearly haven't been the driving forces behind this vehicle, and yet their continued pursuit of utmost extremity reigns supreme, despite missing the mark in almost every regard since their inception.

For anyone familiar with Comatose Music, Pyramids of Damnation is a quintessential release befitting their label, yet it puts on display musicianship (which isn't saying much) that puts to shame a majority of their roster. Far from the worst thing anyone has ever heard, any best of moniker remains equally elusive, with so much of what it has to offer having already been done to death before, and better.