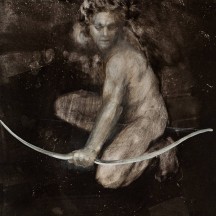 
Of all the recent additions to the Mystískaos roster, say from about 2018 onward, Serpent Column has undoubtedly proven to be one of the most interesting.

The peculiar one manner known as Serpent Column, revolving solely around an individual going by Theophonos, entered the Mystískaos collective in 2019, and has been on a rather prolific release streak ever since. In contrast to many of the other bands that made up Mystískaos at the time, Serpent Column was notable for a much more technical, slightly progressive take on black metal, one with noticeable shades of mathcore influence, especially so on the Endless Detainment EP from earlier this year.

While I did find much to enjoy from this recipe, at times it nonetheless felt as though it was missing some crucial element that would really latch me to it harder and lead to more regular replays of the Serpent Column releases on my part. It seemed as though (like many tech - heavy metal bands) the music was compromising a hook and overall catchiness for technicality and intricacy. But now, in the second half of 2020, Kathodos, the third Serpent Column full length, has arrived to remedy many of my past grievances with the songwriting of the project. The music here is still considerably layered and technical, but in a noticeably more controlled manner. Less chaotic, cleaner and less abrasive on the production, and with a significantly greater degree of catchiness to the riffs, this new Serpent Column sound goes down in a much smoother and more digestible manner while still not really compromising any of the past elements that gave the project its distinct identity.

A big part of what helps with this new formula is a greater sense of the pacing of the compositions on Kathodos. Whereas the Endless Detainment EP and the preceding Mirror In Darkness full length consisted largely of an uptempo barrage of technical black metal, Kathodos eases things up a bit and expands beyond a mere frenetic pummeling approach. This isn't to say that there aren't still manic bursts of energy present, but they're not quite as relentless as on past Serpent Column releases. Now the more aggressive, higher tempo sections are interspersed with greater midtempo segments, as well as some ambient moments as on "Night Of Absence" or "Seinsverlassenheit" that serve wonderfully as a bit of a more relaxed breather from the more urgent momentum that forms the bulk of Kathodos. Additionally, more slowed, slightly groovy sections as on the title track or "Night Of Tongues" help to make the music a lot more rhythmic and memorable, a feeling that was somewhat lacking with the speedier, more technical songwriting of past Serpent Column material.

In many ways, Kathodos represents Theophonos stepping in exactly the direction I was hoping he would with Serpent Column. The careful layering and compositional intricacy of the project is still present, but it's been infused with a greater sense of direction, pacing, and memorability that makes it feel a bit more organic and overall easier to get into. There's quite a lot to unpack here in the way of catchy riffs and excellent tempo manipulation, and Kathodos only seems to reveal more of its genius in these two areas the more one listens to it. I suspect I'll be revisiting this album a lot more so than the others in the Serpent Column discography, and frankly it makes me very excited for whatever may come next from the project.

Lord of plagues, why hesitate?

Written on 06.10.2020 by
Apothecary
Comforting the disturbed and disturbing the comfortable since 2013.
More reviews by Apothecary ››