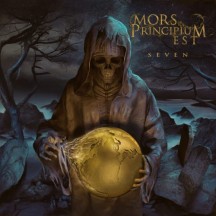 
Mors Principium Est are one of the most reliable bands in melodeath, and Seven has no plans of changing that reputation.

In contrast to their compatriots in Insomnium and Omnium Gatherum, Mors Principium Est veer away from the melancholic melodeath sound associated with Finland and instead take a somewhat more Gothenburg-rooted approach, albeit with increased technicality and a more symphonic approach from the keyboards compared with the likes of Dark Tranquillity; there's certainly a hint of the extreme power sound of Kalmah or Children Of Bodom somewhere in there (although the Dark Tranquillity is strong on "The Everlong Night" here). Whilst they've not quite developed the followings that the biggest Gothenburg or Finnish melodeath groups have accumulated, each new record has been hotly anticipated and well-received, meaning that the group enter their seventh record, helpfully titled Seven, with a lot of momentum behind them.

The formula here is very much the same as on the previous couple of records, although the dalliances with more Gothic territory that popped up on previous record Embers Of A Dying World have not been carried over onto Seven. The album is for the most part (the interlude "Reverence" being the only notable exception) one up-tempo melodeath celebration of riffs and hooky guitar licks after another; the band elect not to begin with a standalone short introductory symphonic track this time around, instead packaging said dramatic intro into "A Day For Redemption" alongside the very classic-sounding melodeath song that follows. The emphatic, ear-catching guitar leads, energetic and technically minded riffs and symphonic interjections; everything you would expect from the opening track of a Mors Principium Est is here and ready to feed hungry fans. "Lost In A Starless Aeon" carries on much the same, the verses peppered with exciting harmonized guitar arpeggios and the chorus instantly memorable.

"Lost In A Starless Aeon" is an early highlight, but it's not the only quality track here. Most of my other top picks lurk towards the end of the album. "Master Of The Dead" has some solid riffs and effective use of synths, as well as probably the most memorable solo on the record, although the sweeps on "At The Shores Of Silver Sand" may rival it for that title. Probably the most consistently attention-grabbing song for me, however, was closer "My Home, My Grave"; the chorus on this song is the only one outside of that in "Lost In A Starless Aeon" that stuck with me each time the album, a perfect combination Finnish melodeath guitar leads, suspenseful chords and ripping vocals. It was the one track that I've found myself getting excited over as soon as it started each time I've run through Seven, and it makes for a pretty epic conclusion to the record.

So, Seven offers more of the classic Mors Principium Est sound, and does it well. However, I'm not sure it's the best rendition of it; having revisited their previous two records in between replays of this, I find the tracks on Dawn Of The 5th Era and Embers Of A Dying World more consistently memorable than those on Seven. I feel like including some of the diversity that those Gothic tangents on their last record offered would have helped with that, as without something like that, a lot of tracks here do blend together, despite little flourishes such as the big symphonic opening to "March To War" that offer brief changes in pace; each song in isolation sounds good and enjoyable, but together in a row, it feels like hearing the same guitar leads and riffs slightly reworked on a song-to-song basis, particularly due to the frantic, technical nature of the riffs.

I can see this being considered slightly nitpicky; plenty of bands in melodeath and death metal fill their records with songs all in the same style, and if it's a band with as strong a sound as Mors Principium Est putting out a bunch of new songs all in their signature style, it's hard to see big fans of the group complaining. However, as someone with a passing rather than vested interest in Mors Principium Est, the combination of the lack of variety and the lack of especially memorable hooks (fast melodic riffs such as those found in abundance here sound very cool, but it's hard to remember one when you're barraged with dozens that sound very similar) does mean that on the times that I wish to revisit the group, Seven isn't likely to be the album I feel most strongly inclined to put on. Nevertheless, for those that just want to hear Mors Principium Est be Mors Principium Est, I would be surprised if Seven does not scratch that itch in a highly satisfying manner.

Written on 25.10.2020 by
musclassia
Hey chief let's talk why not
More reviews by musclassia ››