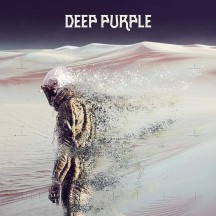 
What exactly makes a good late career album? And when I say late career I mean at least 40 years in.

Sure, sure. Judas Priest's Firepower need not apply. That is the exception, not the rule. But from what I heard from a lot of bands, whether they consistently put out records or just put out reunion records, there were a lot of records from late 60s/early 70s bands that fall quite into the same category: Uriah Heep's Living The Dream, Lucifer's Friend's Black Moon, The Who's Who, Blue Öyster Cult's The Symbol Remains (more on that here). All of them are perfectly fine records for a band from whom you don't expect any masterpiece like in the early days. Some of them have surprising moments of heaviness that throw back to why they were pioneers in the first place despite how you can clearly feel the years pushing harder on them. And then you have Deep Purple.

Other than Judas Priest, who we already decided to exclude from the discussion purely because of how exceptionally awesome Firepower was, Deep Purple is the one band that was most uncompromisingly heavy in its prime, the only one you could've properly called metal, and the only one of the bunch to actually have a page on Metal-Archives as well (Ok, maybe not, but you could argue that some of the others deserve one too). One listen through "Child In Time" and "Speed King" and "Space Truckin'" is enough to really blow anyone's socks off when you put them in context of how old they are. You'd be hard pressed to find anything from that period that is as heavy and blistering that isn't Black Sabbath.

And now fifty years after In Rock the band is still kicking. Their lineup has been stable since 2002, and it the meantime they released five records. Though they've taken quite a long break between Rapture Of The Deep and Now What?!, ever since they've been putting records more regularly. 2017's Infinite did have a bit of a "final album" vibe considering its title and how old the band was. But now we have another record, and considering how the band feels on this one, unless something tragic happens, I doubt this one is the final one either. This one clearly feels like an album made out of passion by a bunch of 70-year-olds that have been playing together for so long that it all comes naturally without feeling autopilot-mode. And that's mostly it.

I mean, just like most of the albums I mentioned in the intro. Perfectly fine for a band from whom you don't expect a masterpiece. Even though compared to those, Deep Purple have very little of the heaviness they used to have, and I can't say I'm complaining about it. Their style is a lot more rock n roll / blues / jazz now, a lot of piano and boogie moments, a lot of the heavy lifting and interesting moments being provided by Don Airey's keyboards, and I definitely don't want Ian Gillan to even attempt his signature screams at this point. So I'd rather also not have Morse try to put more oomph in the riffs if the songs don't call for it. I don't want a heavy album, and I'm glad they're playing to their strengths and that they manage to write songs this good at this point in their career. But I doubt any of these songs will have any staying power in the long run. I can pick some favorites like "Nothing At All" or "The Long Way Round" and "The Power Of The Moon", but every time I do, I have to remind myself of the context these songs come in. And yet, I still find myself grooving along more than originally expected.

I'm glad Deep Purple are still around. I hope they'll have the power in them to come out with one or two more records. I hope they don't feel the pressure to do them for any other reason than because of how much fun they have doing it. Because at this point they've proven everything they had to prove. And I thank them for the music.

Written on 25.10.2020 by
RaduP
Doesn't matter that much to me if you agree with me, as long as you checked the album out.
More reviews by RaduP ››