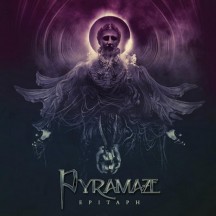 
Epitaph is the latest album from the Danish power proggers Pyramaze. Now, I can say that I've liked every record from Pyramaze that I've listened to. However, the last record didn't really blow me away. It was put together really well, but ended up feeling a bit generic. Does Epitaph change that?

Well, it all starts off pretty good. The short piano intro builds up nicely towards the first real song, which is overall a nice and energetic beginning for the album. It reminded me a lot of the beginning of Disciples Of The Sun. However, immediately after that initial start, Epitaph goes down the same path as the previous record, which means that we get a lot of songs that end up feeling very similar. It's not bad music, but it's rather unexciting. Every once and a while you hear a spark of potential though. The end of "Your Last Call" is a perfect example of that. The piano and drum parts accompany each other really well. It's a groovy and catchy section that makes you wish these moments were more common on this record.

The progressive elements from the previous records seem to be pushed more to the background. Epitaph often feels like a more straightforward power metal album. Pyramaze clearly tried to make a record full of catchy choruses; the problem is that all these choruses tend to sound very similar. so it all feels a bit predictable and generic. On my first listen of this album, I could already predict where songs were heading in terms of lyrics and instrumentals. It rarely surprised me, and as a result it couldn't captivate me.

The production on this record is polished and solid, similar to the previous records but with a bit more low end added in the mix. One tiny remark: I wish the vocals were a little bit more pronounced in the mix. Sometimes it feels like they get a tad overwhelmed by the instruments; it's nothing deal-breaking, but still worth mentioning.

Now, I don't want to sound all negative here, so let's get to some positives. I mentioned earlier that a lot of the choruses weren't really winning me over, but there are a couple that managed to do that. The aforementioned first track ("A Stroke Of Magic"), "Bird Of Prey" and "Your Last Call" all have an enjoyable chorus to them. Those 3 tracks are coincidentally my favourites on this record. Additionally, the performance of the band is good throughout this record. It really shows in those rare moments where you get a glimpse of what could have been.

I'll be honest, I find Epitaph a pretty difficult album to review. There's only so many times you can say that it's not really an exciting record. All in all, It's not bad, but not memorable either. It has its moments, but they are too far and few between, and the lesser focus on progressive elements results in a big loss of personality. The type of record we got has been done better by other bands. This year we've had a few examples, Eternal Idol's newest record for instance (more on that in a later review). but most notably Dynazty's The Dark Delight. While that record isn't perfect, it's been one of the records I've listened to the most this year, with songs that are easily distinguishable and catchy as hell. It basically is everything that Epitaph wanted to be, but unfortunately didn't achieve.