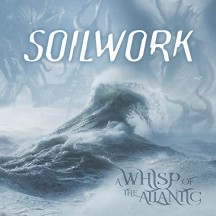 
It can be really interesting to see how a musician's side-project influences their main band's sound.

Unless you're part of Metallica, it's common in the metal scene for musicians to have multiple bands, and so is the case for Soilwork frontman Björn "Speed" Strid, who amongst a litany of guest appearances and studio roles also fronts hard rock outfit The Night Flight Orchestra. The project was formed in 2007, but it's mainly picked up momentum in the past 5 years, with 4 releases within that period of time. Whilst I haven't heard the entire Soilwork discography, from what I have heard, it feels like the increased activity of The Night Flight Orchestra (who also feature Soilwork guitarist David Andersson) could be bleeding into Soilwork's songwriting. There were a few tracks on 2019's Verkligheten ("Full Moon Shoals" in particular stands out) that displayed clear 80s hard rock/metal influences, something I didn't pick up on previous album The Ride Majestic, and the presence of those influences continues onto this year's EP, A Whisp Of The Atlantic.

A Whisp Of The Atlantic is very much an EP of two halves. The record runs for just over 35 minutes, which is surprisingly lengthy for a 5-song melodeath EP, but a large portion of that time is comprised of the 16-minute title track that opens the record. For a band that hasn't featured a song over 6 minutes on one of their records since The Chainheart Machine 20 years ago, this was a bold move on their part, particularly given that Gothenburg metal doesn't necessarily lend itself to such excesses. However, kudos to Soilwork, because "A Whisp Of The Atlantic" is an unexpected triumph.

Featuring only clean singing and piano for the first couple of minutes, the song eventually locks into a slow chuggy groove. Beyond this point, everything featured within the song, whether vocally or instrumentally, is entirely what one might expect from a Soilwork song, but the group manage to translate these skills from their standard style of songwriting to something far more expansive and protracted without the result feeling bloated, dull or stitched together. "A Whisp Of The Atlantic" feels like a 16-minute song rather than multiple shorter tracks spliced together in an attempt to appear ambitious, and Soilwork deserve a lot of credit for pulling this off; a proggy instrumental stretch about two-thirds of the way into the song in particular stood out as a fine example of Soilwork pushing themselves on this track and rising to the challenge.

The title track is the first of the two halves I mentioned above; the other four shorter songs offer contrast to the lengthy opener in both approach and style. Right after "A Whisp Of The Atlantic" winds down to its sedate conclusion, "The Nothingness And The Devil" opens with a riff drenched in 80s stadium rock swagger, with the brash keyboards accompanying the riff only feeding into these vibes. Replace Strid's harsh screams with a clean singing style when the verse arrives and you could be fooled into thinking it was a The Night Flight Orchestra track, or at least until the intensity of the percussion ratchets it up and reveals "The Nothingness And The Devil" as a Soilwork track. As someone who has little interest in that kind of sound these days, I feel like the influences work surprisingly well when added to Soilwork's admittedly already accessible brand of Gothenburg metal.

The combination is played about with to various degrees on the remaining tracks; the synths are the main element channelling this vibe on "Feverish", a blast-heavy track otherwise firmly in line with the material on recent Soilwork records, whilst "Death Diviner" slows things down and swags things up for large stretches (I have to say, the final chorus of this song kicks all kinds of ass). "Desperado" also deserves a shoutout for the symphonic approach taken with the use of strings (or synths sounding like strings) on the track, a surprising inclusion, but one that works well.

My history with Soilwork has been one of moderate enjoyment rather than infatuation, with the glaring exception of the immense The Ride Majestic, and A Whisp Of The Atlantic continues to show that The Ride Majestic was the exception rather than the rule on that front, as I don't love any of the songs here (although the title track hugely impresses me, and the final minute or so of "Death Diviner" makes for a great conclusion to the EP). Still, this is another well-written and enjoyable effort from the group, and one that shows a clear intent to play around with their sound and push themselves creatively, which is always enjoyable to see in a band well into their third decade of existence.

Written on 06.12.2020 by
musclassia
Hey chief let's talk why not
More reviews by musclassia ››