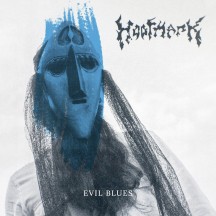 
Hoofmark didn't forget about the blues.

Portugal's Hoofmark is the project of Nuno Miguel Monteiro Ramos, with some session bass, synths and drums, that tries to infuse some of the darkness of blues and country into black metal. According to him, he initially just wanted to create some black metal but started getting an affinity for particular brands of blues and country that sparked the same enthusiasm that metal did. Well, what Hoofmark does may not necessarily be the blues, but something maybe closer to Panopticon, but lacking the cohesiveness. Or at least that was mostly the case with their demo, Stoic Winds back in 2016. Evil Blues sees the sound as a soup where the ingredients finally started seeping their tastes. Mostly.

Evil Blues is a weird, but endearing album. It definitely seems authentic in its attempts at taking the sound forward, even if the parallels with Panopticon are hard to ignore. But then again it's not like country didn't already have some impact on other metal musicians, otherwise there wouldn't be a Townes Van Zandt cover album on the website. Country isn't a genre I have dug that deep into and I probably couldn't tell you a Townes Van Zandt song if you stopped me on the street and asked me about it, so I'm a bit out of my element here. Might also be because Nashville execs completely destroyed the credibility of the genre in recent years. But if Hoofmark and all these other guys are to be believed, it's worth looking beneath the surface. In such a story-focused genre, there may be some stories to uncover, some darker than others. I assume the darker ones appealed most to Hoofmark.

Evil Blues is a warm record. It definitely sounds like it was made in either Portugal or Arizona and not in Norway or Oregon. Which is a weird tone to take black metal in. By drenching it in the sun and putting a lot of drawn-out guitar sections that bring the sound out of the metal sphere, it feels like it evokes a dry desert which keeps a lot of secrets, in addition to sounding mighty psychedelic. The black metal parts themselves are more in line with the first-wave, with a definite demo inclination for the sound. It's crude, but there is a lot of oomph behind it, even though I probably wouldn't give it much thought if it was just black metal. But the non-metal parts are not as easy to pin down. There's the country and the blues that I already mentioned, but a lot of the times the vocals remind me more of some 90s alt rock, and there are plenty of times where I can't put my finger on what genre to call what I'm hearing. Maybe I should stop trying to do that and just enjoy this passionate mess.

The five years definitely left their mark on how well Hoofmark executed this sound, and yet there's still a lot of room for growth. Most importantly, it sounds organic. Almost as importantly, they didn't forget about the blues.